New African-American Death in the US by police fire | Waves of protests around the world against racism
Defence Redefined
Published on 14/06/2020 at 12:30 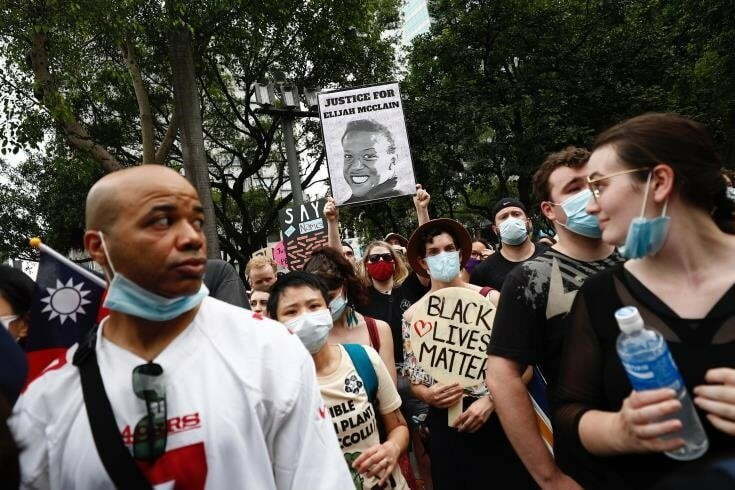 A new African-American death in the United States (US) on Friday night by police fire has led to the resignation of Atlanta Police Chief Erika Shields and a new wave of violent protests.

Rayshard Brooks, as seen in a video posted on social media, appears to have escaped police officers who tried to arrest him outside a restaurant and then chased him. During the chase, one of the officers appeared to be shooting Brooks, who tried to use the taser he had previously detached from the police.

The wave of protests that began in the United States after the violent death of African-American George Floyd by a police officer continues to spread to cities around the world, with major slogans against racism and police violence. Demonstrations continue to shake the United States, London, Australia, protests have taken place in Taipei and many other countries and cities.

Also read: Riots in the US | Trump has announced the deployment of thousands of heavily armed soldiers

Demonstrations in Zurich and other Swiss cities

Thousands of people protested in Swiss cities, denouncing racism and police violence, despite a ban on gathering more than 300 people so as to deal with the Covid-19 epidemic. The largest demonstration took place in Zurich, where more than 10,000 people gathered, most dressed in black.

Demonstrating in the city center, protestors held banners with slogans such as “Black Lives Matter”, “Racism is also an epidemic” or “I Can`t Breath.” Thousands of people protested in Bern, and about a thousand protestors gathered in the center of Lausanne.

The demonstrations were aiming to denounce police force in the US as well as in Switzerland where according to the protestors three people lost their lives in the last four years from the actions of Lausanne’s Police.

Protestors held placards with the name of George Floyd and Mike Ben Peter, a Nigerian killed in 2018 in Lausanne, after he was stopped on the ground by police, as was George Floyd in Minneapolis.

Thousands on the streets of major French cities

In all major French cities, thousands of protestors went on the streets to denounce racism and police violence, in the wake of anti-racist protests in the United States and around the world, following the assassination of George Floyd a day before the scheduled speech by French President Emmanuel Macron.

Thousands of people gathered at the Place de la Republique in the afternoon, planning a march to the Opera House at the invitation of “Antama Traore” committee, a young black man who died in July 2016 after being arrested by police in the Paris area.

Asa Traore, the young man’s sister, and one of the committee’s leaders, called on the crowd to protest “to denounce the denial of justice, social, racist and police violence”, calling for new investigations into the gendarme officers involved in the fatal arrest of Adama Traore. Many of the protesters wore black T-shirts with the slogan of the Traore family for four years: “Justice for Antama”. “In the land of human rights, the police are killing, we want the videos,” or “As long as we don’t get justice, you won’t have peace,” the rally’s banners read.

In a statement issued today, Amnesty International called for “systemic reform of police practices” in France. “The seriousness of the situation has been met with a comprehensive response from the authorities,” the NGO said in a statement, which welcomed the abandonment of the “Headlock” arrest technique as it was announced by the Interior Minister Christophe Castagner. Similar mobilizations are planned today in Marseille, Lyon, Montpellier, Nantes, Saint-Nazaire, Bordeaux and tomorrow in Strasbourg.

Racism is “a disease that affects society as a whole,” Emmanuel Macron said in a cabinet meeting on Wednesday. Tomorrow’s speech is expected from both the anti-racist movement and the police, who have expressed strong dissatisfaction with the measures announced by the interior minister to tackle racist behavior in the ranks of the French police. French police have protested against the government’s stance, implying that they are tolerating violence and racist behavior in their ranks.

Anti-racist demonstrations and in Cyprus

An anti-racist event is organized next Friday, June 19, by AKEL and political and non-governmental organizations, on the occasion of June 20, World Refugee Day, in Eleftherias Square. The Secretary General of AKEL will be the speaker and representatives of refugees and immigrants will address greetings.

Furthermore, an event is being held in Limassol today with the slogan “All Purnares should be closed”.