NEWS
NATO Summit | Ministry of National Defence acts towards armament programs on the sidelines of Madrid summit
Defence Redefined
Published on 30/06/2022 at 09:21 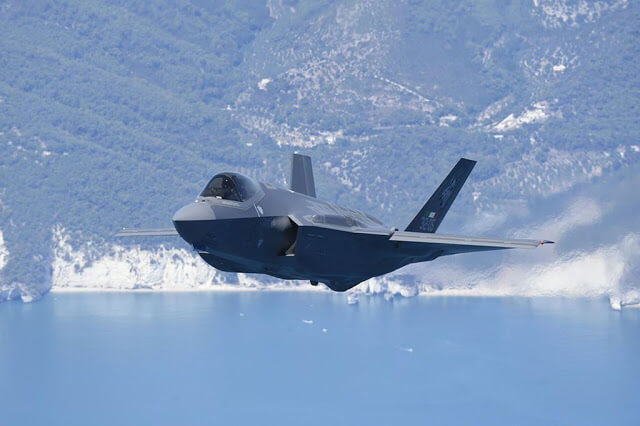 The official Greek request to the US authorities regarding the acquisition of the F-35 was signed yesterday and is expected to be sent in the coming days.

Greece is requesting the procurement of 20 F35 aircraft, as previously announced by the Prime Minister, and the conditional procurement of another 20. In fact, the process will be accelerated, as in the coming days, the political and military leadership of the Ministry of Defence will visit the US to discuss the said request. According to government sources, signing and sending the Letter of Request (LoR) is the first step in a long process.

In addition, the Minister of National Defence, Nikos Panagiotopoulos, will travel to the United States where he will meet with his counterpart, Lloyd James Austin, between July 16 and 18, while five days prior to the arrival of Mr. Panagiotopoulos in Washington, the Chief of the National Defence General Staff, Constantinos Floros, is also planning a visit to the United States.

In the coming days, in fact, two programs of American interest are expected to be discussed in Parliament, namely the supply of two MQ-9 UAVs and the AAV-7 amphibious vehicles for the Hellenic Armed Forces. Also, on July 11, a squadron of American F-35s and F-15s is expected in Souda, according to Kathimerini.

These are moves that strengthen the deterrent capability of the country and the interoperability of the Hellenic and US Armed Forces, reflecting the strategic level of bilateral defence relations.

Yesterday, on the sidelines of the summit, Mr. Panagiotopoulos met with his German counterpart, Christine Lambrecht, with whom they agreed to exchange the BMP-1 armored vehicles with the Marders starting from July, while they also discussed cooperation in the industrial sector.

According to information, the program of upgrading the Leopard 2A4 and the supply of 200+ Lynx Armored Combat Vehicles is the next major armament program which will be submitted for approval to the Committee on Armament Programs and Contracts of the Parliament.

US support for Turkish F-16s

It is worth noting that the news of the signing of the official request to the US for the F35 comes at a time when Recep Tayyip Erdogan – in his ‘bargain’ with Joe Biden in exchange for lifting the veto on Sweden and Finland – ensured the full US support for Turkey’s F-16 fleet modernization plans.

“These plans are almost underway and must be implemented through the procurement process, but the United States supports the modernization of Turkey’s fighter fleet, because it contributes to NATO security. Turkey’s strong defence capabilities contribute to a strong NATO defence,” said the US Assistant Secretary of Defence.

Of course, the road to finalizing the F-16 agreement is a long one for Turkey, as it must also be approved by Congress, which at the moment is rather negative about this possibility.

In terms of balance of power, this development does not cause any concern in Athens, as 83 F-16s are already being upgraded to Viper, while just a few days ago the upgrade of 38 to F-16 block 50++ with surplus components was approved.

At the same time, Athens will soon begin the process of acquiring the F-35 – by sending a relevant letter to the US – the first of which may arrive in Greece in 2028, when the upgrade program of the Turkish F-16s may not yet have been completed.