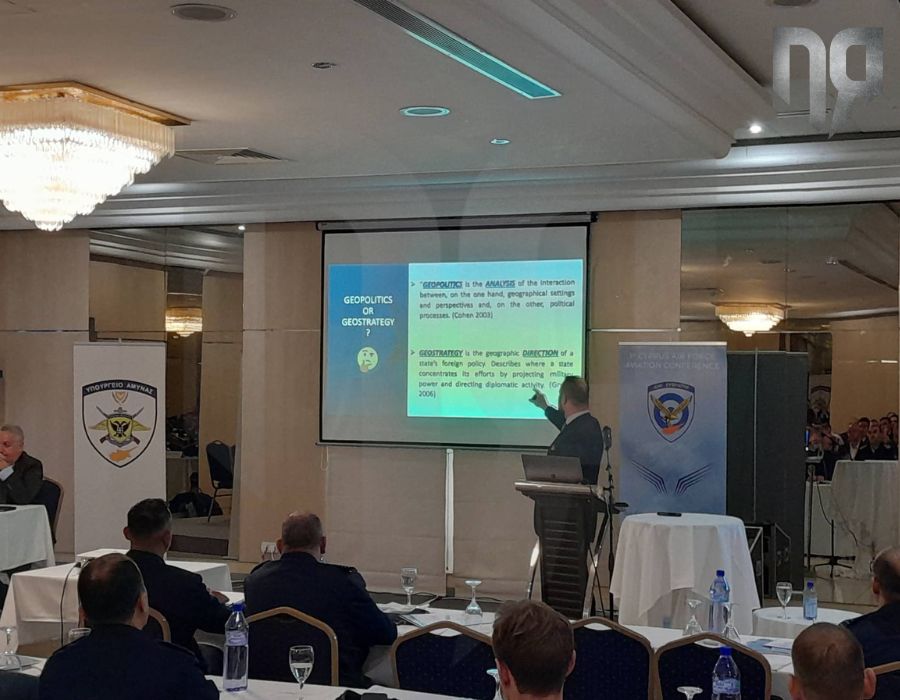 The National Guard Aviation Command organized the 1st International Aviation Conference in Cyprus entitled “Air Force in the Contemporary Operational Environment”. In addition to National Guard personnel, the Conference was attended by members of the Armed and Security Forces from 12 countries (Egypt, France, Greece, Zambia, the USA, the United Kingdom, Indonesia, Jordan, Israel, Italy, Canada and Serbia), academics and the accredited Defence Attaches in Cyprus. The conference took place on November 24-25 in Larnaca and the opening ceremony was attended by the Minister of Defence, Mr. Charalambos Petridis, and the Deputy Chief of the National Guard, Lt. Gen. Loukas Hadjimichael. The conference was divided into 4 parts which covered the following topics: Aviation Security, Airpower on the modern battlefield, Airpower as an instrument of geopolitics and Modern technologies in aerospace. 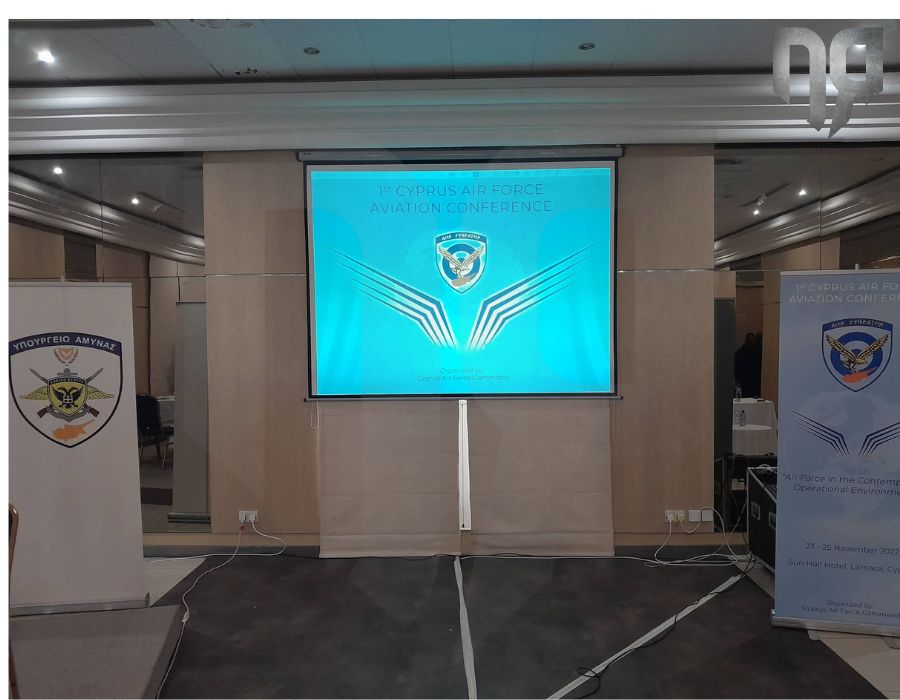 Professor George Boustras of the European University first presented and analyzed the challenges in the field of security science with an emphasis on airpower. He referred, among others, to emerging security issues, public awareness of security risks and the impact of environmental change and social media.

Next, Assistant Professor Anastasios Plioutsas, from Coventry University, spoke about the improvements in military security programs in the modern operational field. In his presentation, after referring to the concept of security in the field of aviation and the rules followed by military organizations, he proceeded with proposals for improvements to the existing framework.

Finally, Professor Don Harris from the University of Coventry addressed the question of decision-making and whether it can be an object of learning and education. He addressed, intel alia, training in decision-making matters by adopting mnemonic methods and proceeded with proposals for their further improvement. 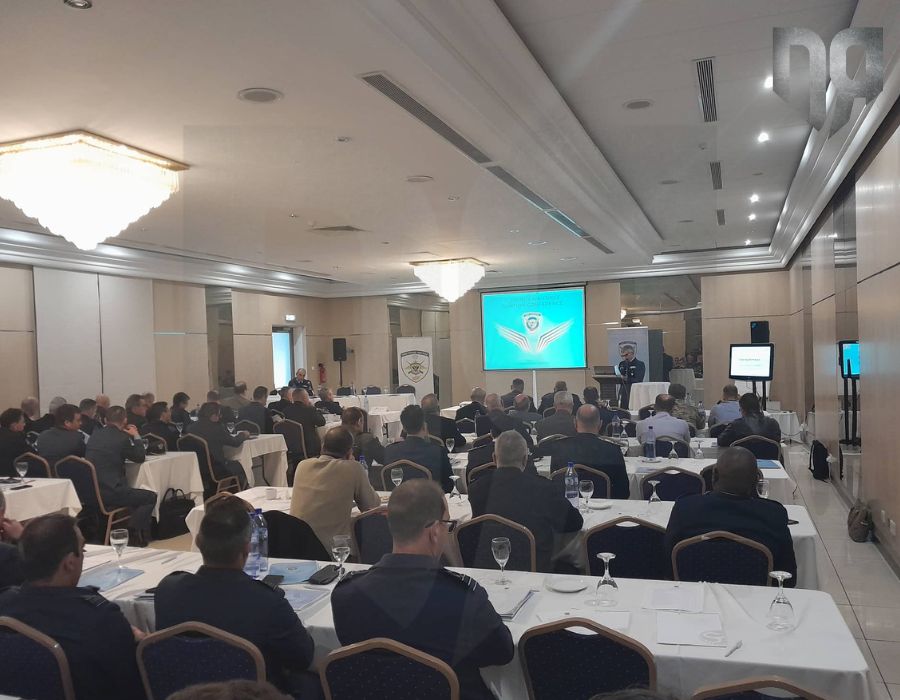 Airpower on the modern battlefield

At first, Group Captain George Anepsiou of the Hellenic Air Force referred to airpower on the modern battlefield and its geostrategic role, with an emphasis on the case of Greece. In his conclusions, he referred, among other things, to the importance of investment in the space sector for the achievement of broader important national security and geopolitical goals.

Then, Dr. Athanasios Potsis, President of the Association of Hellenic Industrial Space Association gave a presentation. He referred to the role of space in supporting modern multi-spatial operations as well as Greece’s existing and future capabilities. Airpower as a geopolitical instrument

Dr. Petros Savvidis, from the Centre for Security and Intelligence Studies of the University of Buckingham, delivered the first talk of the third part, on the air dimension of the modern battlefield. Dr. Savvidis thoroughly referred to the modern wars of Ukraine and Nagorno-Karabakh, emphasizing the operational conclusions resulting from the use of airpower in these two conflicts. He made special reference to the role of unmanned aircraft, which are now available at all levels, from a strategic to an operational level, while he also referred to the vulnerability of ground forces on the modern battlefield.

Afterwards, Lt. Col (AF) Panagiotis Hadjipavlis of the National Guard’s Air Force spoke about the role of airspace in protecting the sovereign rights of the Republic of Cyprus in the Exclusive Economic Zone (EEZ). He referred, among other things, to Turkish strategy, issues of geopolitical theory and international law, the approach to airspace in the light of critical geopolitical theory, the role of Turkish drones and the need to adopt a holistic geopolitical approach.

Then, Stefanos Karavidas, retired pilot of the Hellenic Air Force and instructor in the United Arab Emirates, referred to the security geopolitics of the Eastern Mediterranean and the geostrategic role of airpower, with particular emphasis to the case of Cyprus. Mr. Karavidas, after proceeding to a clear explanation of the distinction between geopolitics and geostrategy, proceeded to analyze the role of airpower in the region and also the positive impact that strengthening the National Guard’s Air Force would have at a geostrategic level regarding the partnerships of the Republic of Cyprus with other states in the region. 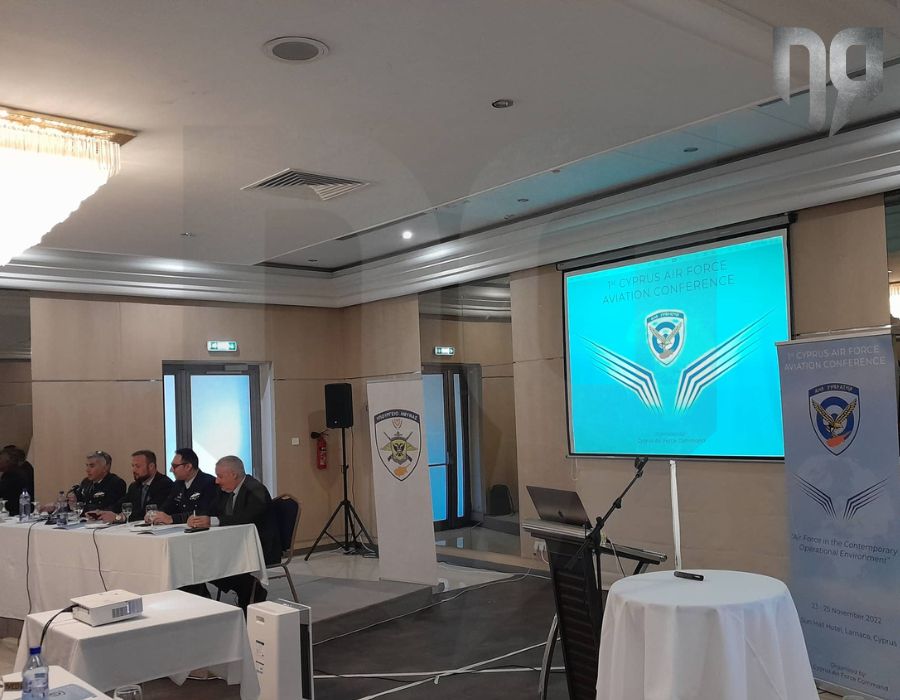 In the first presentation, Professor Dimitris Drikakis of the Defence and Security Research Institute of the University of Nicosia referred to the role of artificial intelligence. He presented the methods, benefits, weaknesses and challenges of modern technology. He mentioned, among other things, ethical issues that arise with the use of artificial intelligence, the mitigation of uncertainty with the increased flow of information, the need for a prudent choice of software as well as the role of evaluation and control.

Afterwards, Professor Vasilios Pakhidis from the University of Cranfield referred to the evolution of aircraft engines, the perspectives and future challenges. Among other things, he discussed at length the evolution of engines in civil and military aviation as well as the differences of 1st, 2nd, 3rd, 4th and 5th generation warplanes. He also referred to the problem of fuels and pollutants as well as the future transition to synthetic fuel and hydrogen engines.

Finally, Capt. (AF) Savvas Theodoulou referred to the role of cyber security in the aviation sector. He referred to the dangers of cyber threats – both civil and military – facing the complex airspace. He said, among other things, that an organization’s resilience to cyberattacks depends on its ability to detect threats, respond and recover. In addition, regarding the ways to improve cyber security, special reference was made to the technology of cyber ranges so that there is better preparation in countering possible cyberattacks. 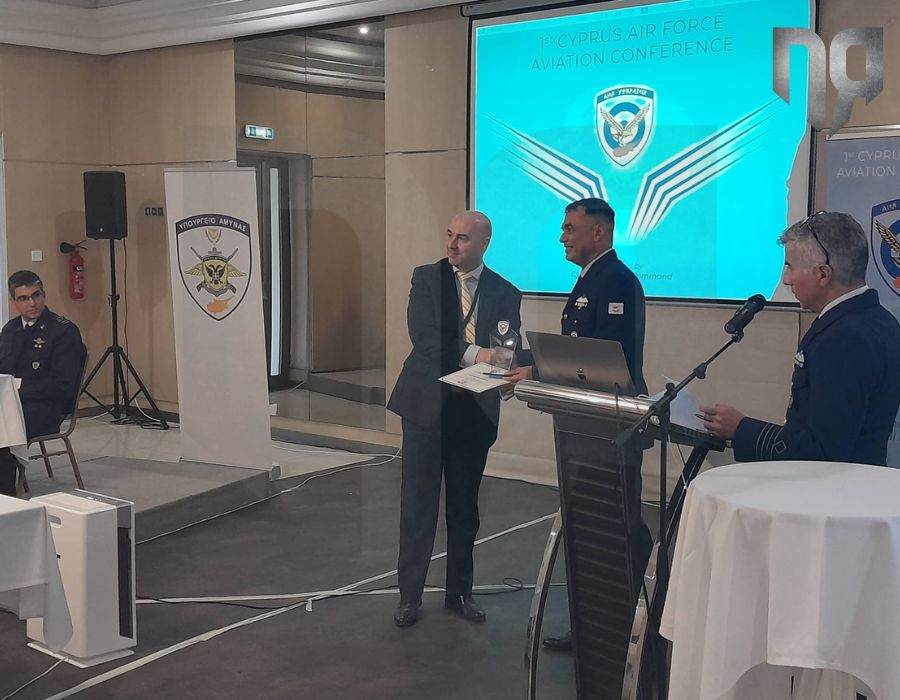 The 1st International Aviation Conference in Cyprus was successfully completed, demonstrating the hard work and professional level of the personnel of the Air Force of the National Guard. 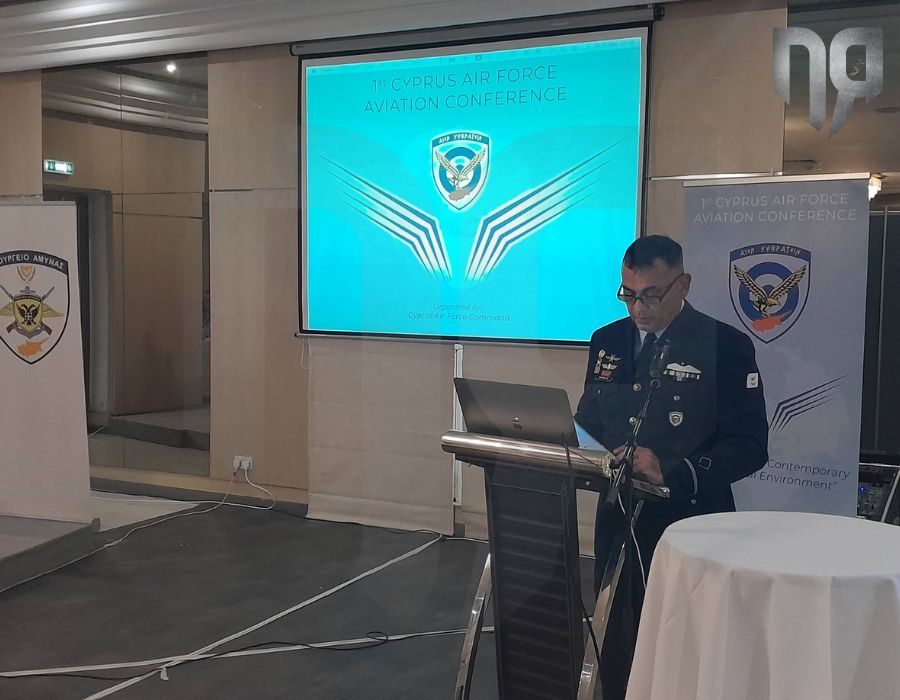 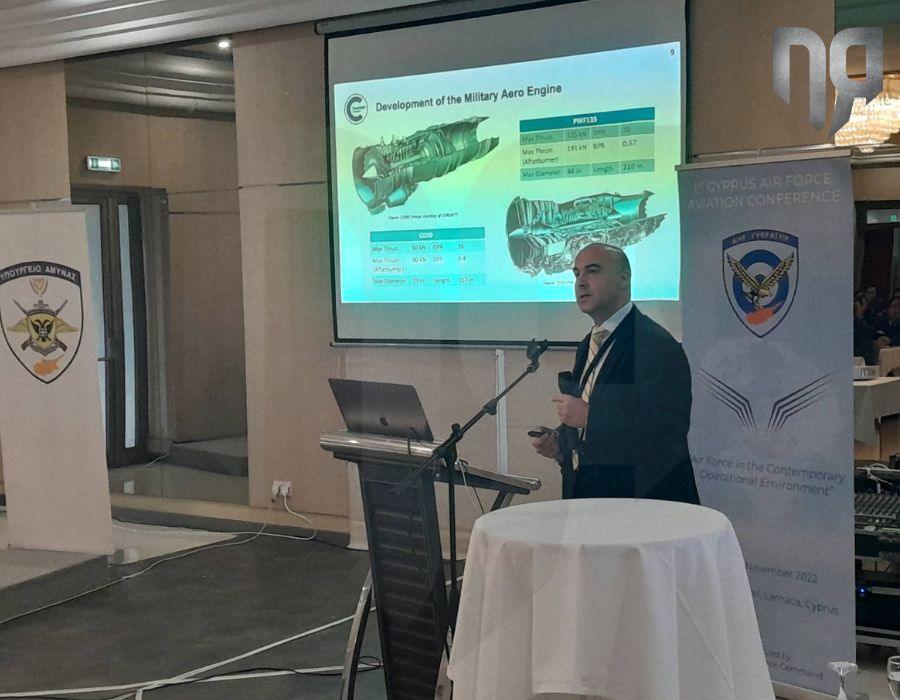 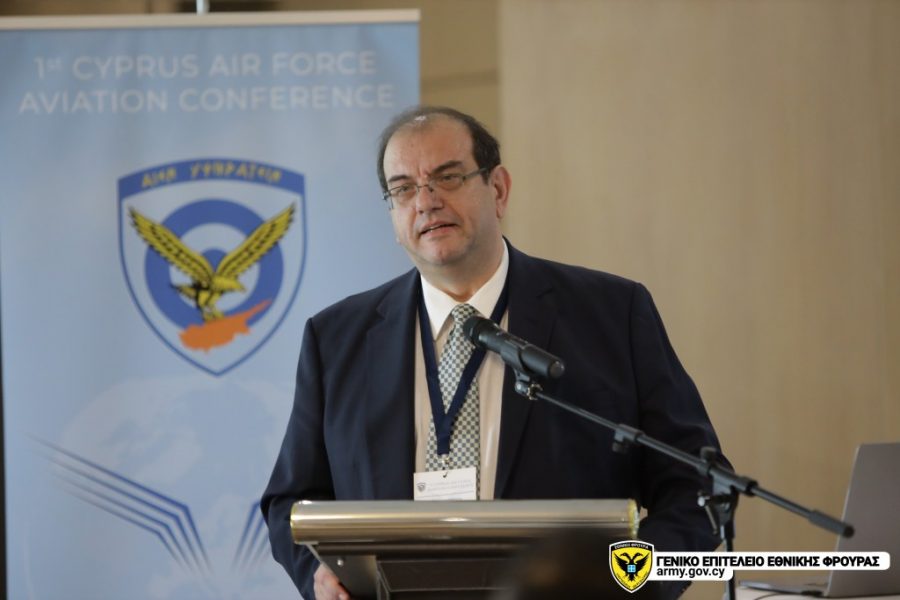 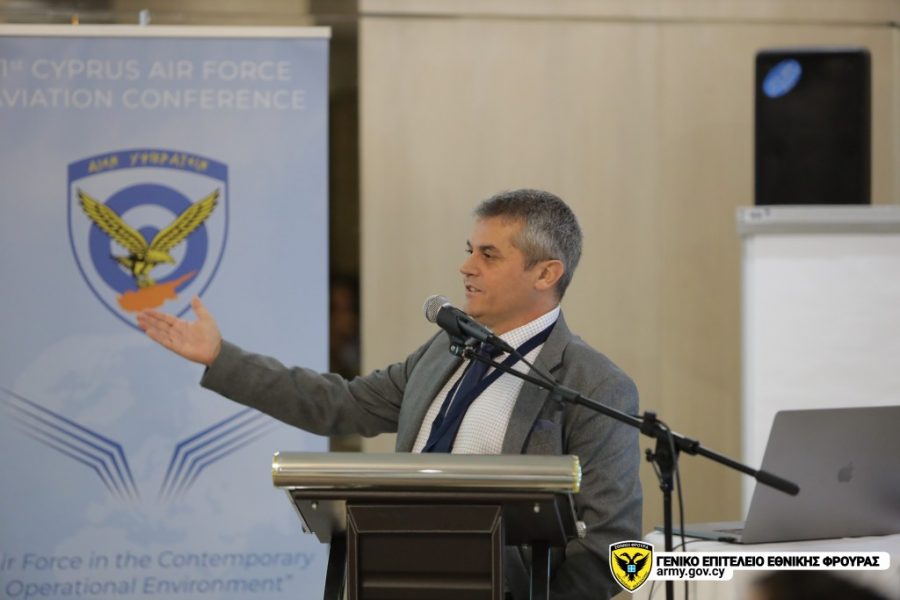 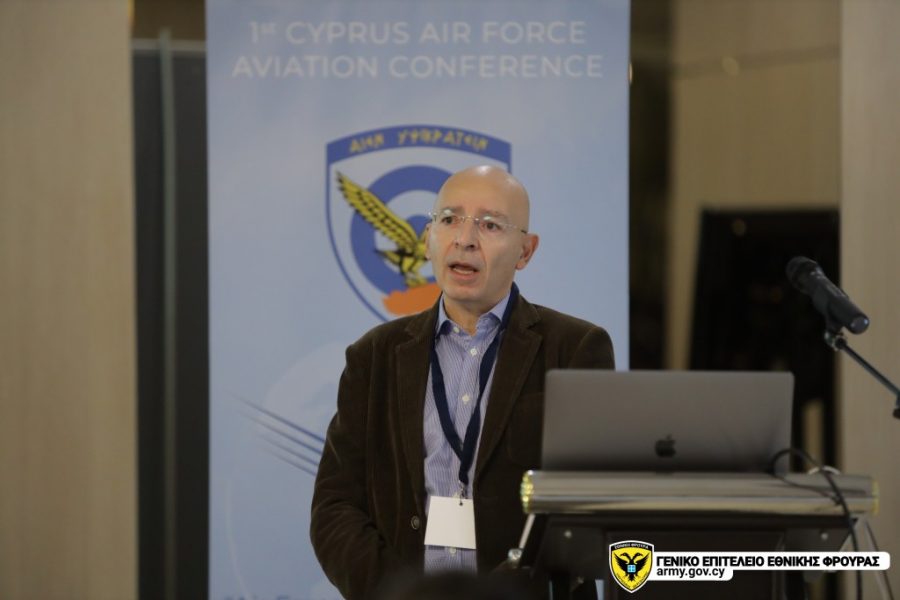 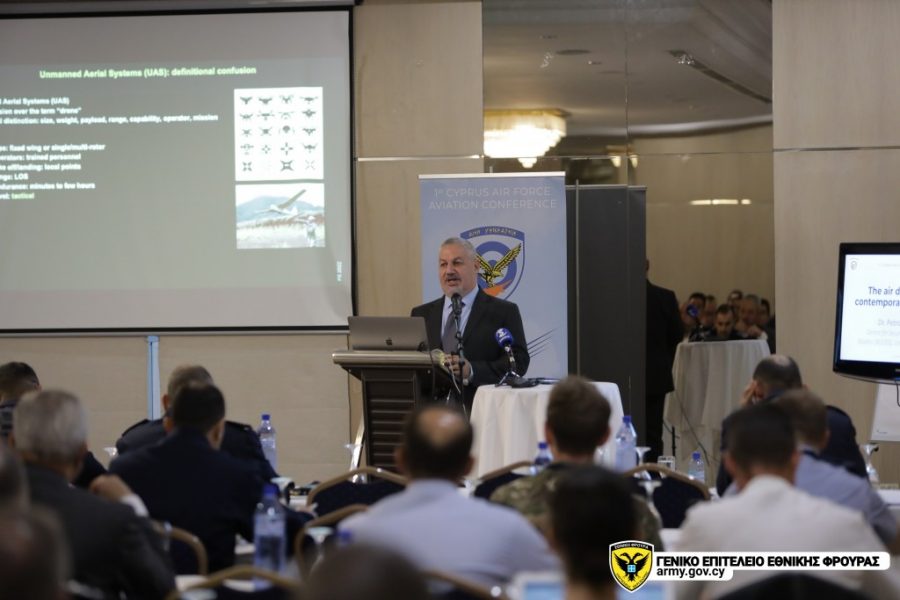 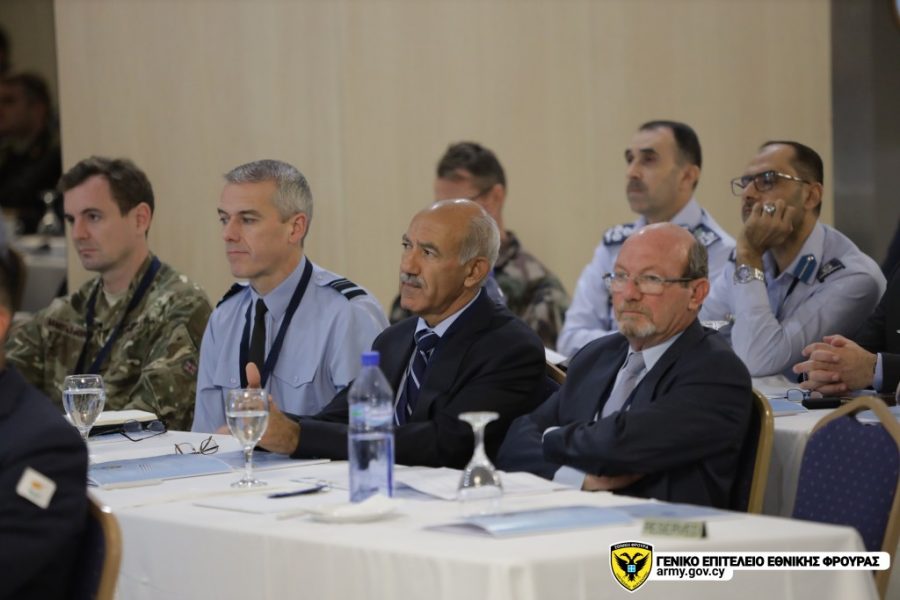