INTERNATIONAL RELATIONS
N. Dendias | Joint commitment with Vietnam to the International Law of the Sea
Defence Redefined
Published on 02/08/2022 at 12:27 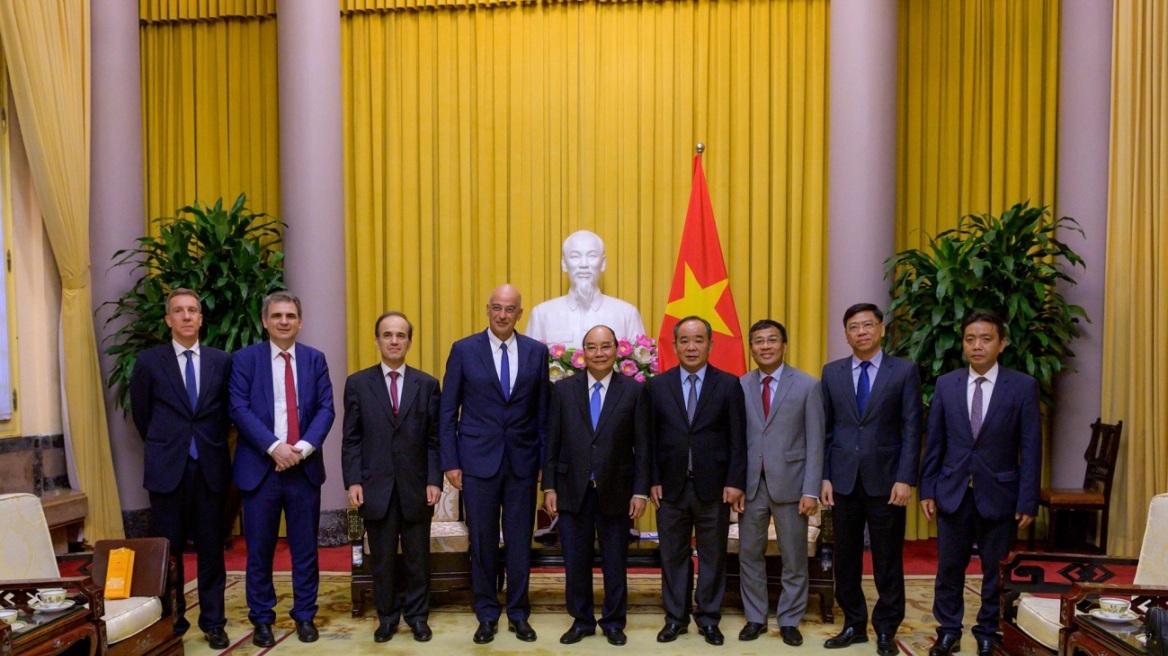 Foreign Minister, Nikos Dendias, was welcomed by the President of Vietnam, Ngyen Xuan Phuc, and the country’s Prime Minister, Pham Minh Chinh, as part of his visit to Hanoi.

Earlier, he held talks with his Vietnamese counterpart, Bui Thanh Son. The visit in question follows the visit of the Vice President of Vietnam to Athens, Vo Thi Anh Xuan, last November, as well as that of the President of Greece, Katerina Sakellaropoulou, to Hanoi last May.

The talks focused mainly on developing bilateral ties, primarily through expanding trade in areas of common interest, such as shipping and renewable energy, diplomatic sources said.

Special reference, as they point out, was made to the two countries’ joint adherence to International Law and the Law of the Sea (UNCLOS), which is a compass for resolving all disputes. They also note that Vietnam is a founding member of the “Group of Friends of UNCLOS”.

It was also noted that this issue was at the center of the Foreign Minister’s contacts in New Delhi and Tokyo last April and is expected to be discussed during contacts with ASEAN Foreign Ministers in Cambodia.

In fact, during the contacts in Hanoi, it is emphasized that Mr. Dendias informed thoroughly about the challenges facing our country in the Eastern Mediterranean, and at the same time he was informed about the situation in the South China Sea.

Also, a memorandum of understanding was signed in the field of Diplomatic Education and in the context of cultural cooperation, while the Minister visited the offices of the National Olympic Committee of Vietnam, where he made a donation to support young athletes in the context of our relevant initiatives at the United Nations.

Cooperation in the context of international organizations was also discussed, while Mr. Dendias thanked Vietnam’s support of the Greek candidacy for the Security Council in 2025-2026.

Furthermore, EU-Vietnam relations were examined in light of the implementation of the Free Trade Agreement as well as the Investment Protection Agreement.

Finally, the Foreign Minister referred to the contribution of the Vietnamese soldiers, who fought on the Macedonian front in the First World War. Among them was the later “father” of Vietnam’s independence, Ho Chi Minh, the diplomatic sources point out.

Mr. Dendias himself, in a post on Twitter, announced the creation of a bust of the historical leader of Vietnam in Edessa, while the transfer of the ashes of Greek Sarantidis, who fought in the Vietnamese Army, was discussed.