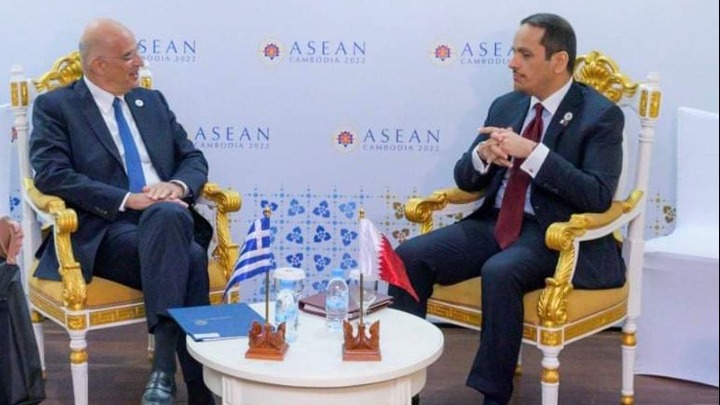 On the sidelines of the Summit’s works, Nikos Dendias held a series of meetings with his counterparts. Earlier, he met with the Deputy Prime Minister and Minister of Foreign Affairs of Qatar, Sheikh M. Abdulrahman bin Jassim Al Thani.

During the meeting, a constructive discussion was held on Greece-Qatar relations, with an emphasis on the economy and investments in the Eastern Mediterranean, Afghanistan, and Iran, according to Nikos Dendias’ post on Twitter.

During these meetings, and in addition to the context of bilateral political and economic relations, Nikos Dendias raised the issue of International Law and the International Law of the Sea (UNCLOS). “In other words, the need to have a stable framework, within which both free navigation, safety and cooperation in the marine environment will be ensured,” Nikos Dendias emphasized in his statement yesterday.

In fact, he found that all the countries he discussed with had a very positive response to this particular position. “In general, it seems that in the existing context and following the Russian invasion of Ukraine, the international community now knows that revisionism, the questioning of borders, and the refusal to jointly sign the rules of International Law and the International Law of the Sea lead humanity to adventures and that we must have a firm attitude, an attitude that ensures progress, stability and prosperity,” underlined the Minister of Foreign Affairs.

Specifically, in the meeting with Brunei’s second Foreign Minister, Erywan Yusof, bilateral relations, investments, joint adherence to UNCLOS, cooperation in the UN as well as developments in Southeast Asia and the Eastern Mediterranean were discussed.

Later, talks with Singapore’s Foreign Minister, Vivian Balakrishnan, focused on cooperation between the two countries and international organizations, developments in the Eastern Mediterranean, Ukraine, and UNCLOS as the sole authority to resolve maritime zone issues worldwide.

Then, during the meeting with the Secretary General of the ASEAN organization, Lim Jock Hoi, Nikos Dendias expressed his satisfaction with the accession of Greece to the Treaty of Friendship and Cooperation of Southeast Asia. The promotion of cooperation in shipping, culture, economy, and EU-ASEAN relations was also at the heart of the meeting.

In addition, the Foreign Minister met with his Cambodian counterpart, Prak Sokhonn, whom he congratulated on his ASEAN presidency.

They also discussed bilateral cooperation in international organizations and the developments in Myanmar. Greece and Cambodia share the same views on matters of International Law, Nikos Dendias underlined in his post on social media.