INTERNATIONAL RELATIONS
Moskva | Is the captain and half of the crew alive?
Defence Redefined
Published on 17/04/2022 at 15:00 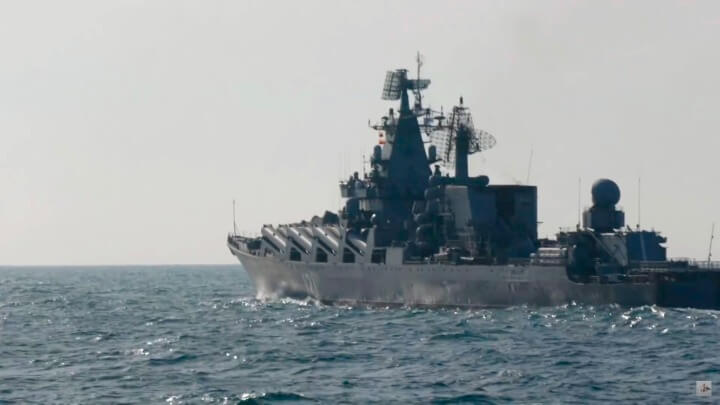 The commander of the Russian Navy, Admiral Nikolai Yevmenov, met with members of the crew of the sunken Moskva cruiser and stated they would continue to serve on other Russian warships, both the Russian news agency Tass and the Russian Foreign Ministry reported.

Russia announced on Thursday night that the flagship of the Russian Black Sea Fleet had sunk following an explosion of ammunition without specifying what caused the explosion. It also announced that the vessel of about 12000 tons sank during the towing process due to adverse weather conditions.

Ukraine, for its part, announced that the ship was hit by two Ukrainian Neptune missiles, a fact that was confirmed yesterday by a high-ranking US Pentagon official.

The Kremlin has not provided any information on casualties among the 510 members of the Moskva crew.

The Russian Defence Ministry claimed that the crew was evacuated from the Russian cruiser. Ukrainian sources, however, said the ship’s evacuation operations had failed due to weather conditions.

The Russian Ministry of Defence, with yesterday’s 26-second video, shows Admiral Nikolai Yevmenov and two other officers inspecting about 250 lined-up sailors and officers of the sunken ship. However, the Ministry of Defence does not specify when the event took place.

The video came in response to allegations by Ukraine that almost all of Moskva’s crew had been killed.

A) Captain alive
B) ~240 crew in video, so around 50% dead or injured pic.twitter.com/CsnvRxy9Sm

According to the video, there appear to be about 240 crew members, out of a total of 510 in Moskva.

The video, shared by the Russian Ministry of Defence via Facebook and Twitter, is accompanied by the report that the Senior Navy Commander, Admiral Nikolai Evmenov, met with the crew of Moskva. The new “command of the Black Sea Fleet” was also present at the meeting in Sevastopol.

Sutton geographically positioned the event with the crew at 44.564798°, 33.416280°. He notes that as in other areas of the Russian Navy, there are signs of formations on the ground. These are visible in satellite images. 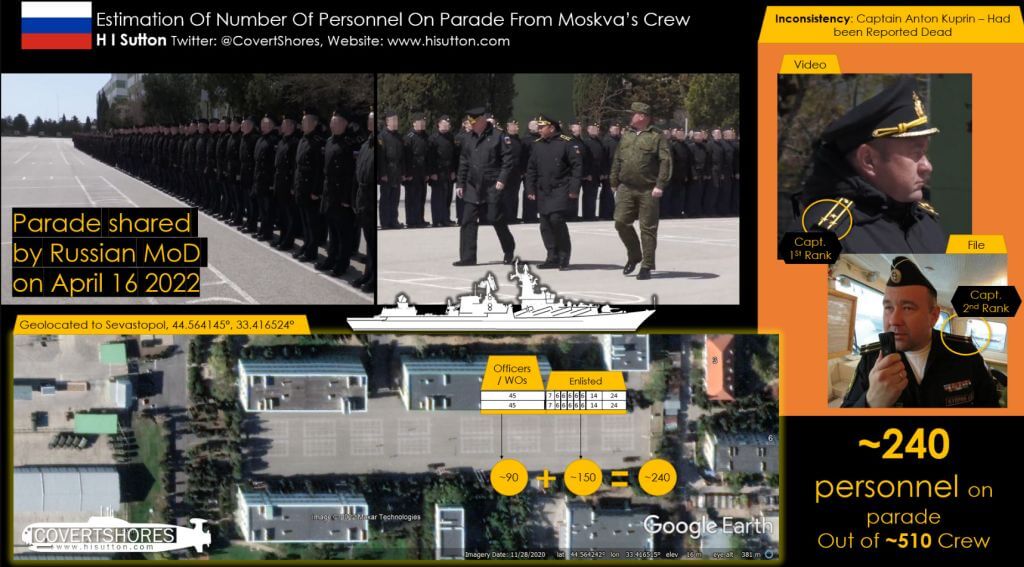 As he points out, some of the crew may have been injured or killed. In addition, there were reports of some being rescued by Turkish or foreign ships. If so, they may not show up (which cannot be confirmed at this time).

The Moskva cruiser is said to have caught fire shortly before 18:52, local time, on April 13. At that time it is recorded in satellite images (Sentinel 1 satellite), as shown by other ships near it for help.

As the analyst notes, the cause of the fire is disputed, but reports of a Ukrainian rocket attack are reasonable. Whatever the cause, it exploded and eventually sank. 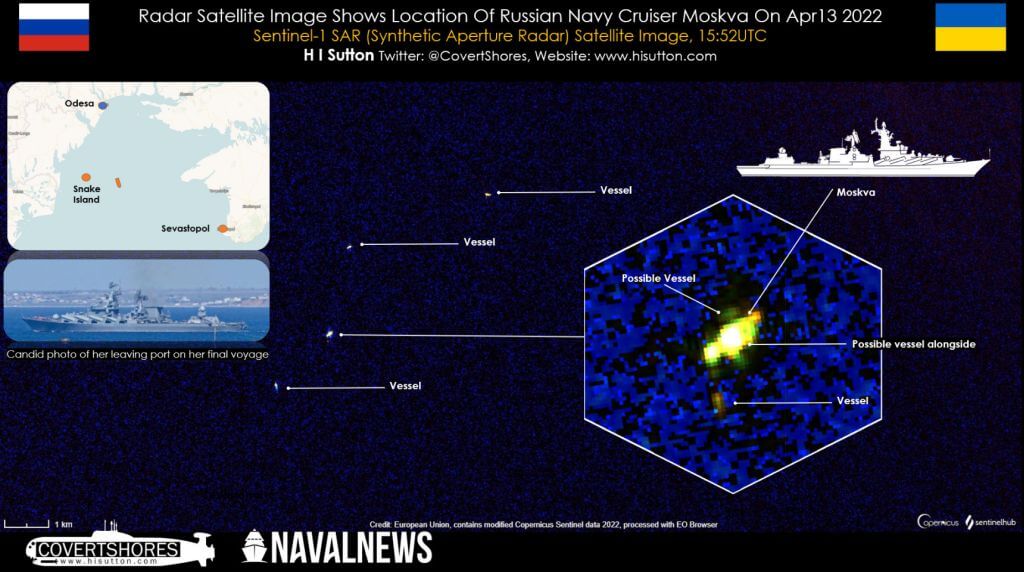 The question arises if the video is from another, previous event. The video shows a man who fits in very well with the captain of the ship, Anton Kuprin. He has the insignia of a 1st Rank Captain and acts as a commander. Kuprin has been widely reported by the international media as dead and that he was killed in the explosion in Moskva.

In a widely circulated archive photo, Kuprin appears as a 2nd Rank Captain. Evidence shows that it was promoted in 2020 or earlier.

H.I Sutton notes that the loss of such a large part of the crew is not something unexpected, as in fact many estimated that the death toll would be higher.

As to whether the video was staged and whether this is a scam, H.I Sutton responds: “No, at least if it was, then more sailors should have been present. All events seem to be staged. So it may be exactly what it says it is.”

As for the governor of Moskva, he notes: “It is possible that the reports of his death were incorrect. Note that a truck with the famous “Z” sign is visible in the background.”

Evaluating the available data, the analysis concludes that:

In any case, this is still a significant loss for the Russian Navy in both personnel and equipment.