INTERNATIONAL RELATIONS
Mitsotakis – Biden meeting | Democracy, common views on energy, the F-35s and rejection of Turkish provocations on the agenda
Defence Redefined
Published on 17/05/2022 at 09:00 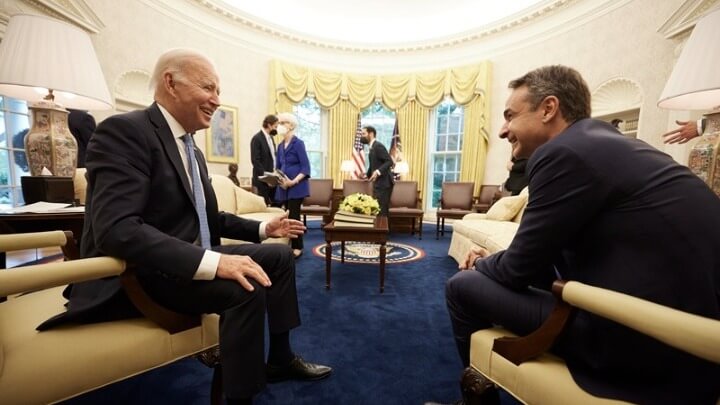 A wide range of issues of bilateral, regional, and international interest were raised during the private meeting between Prime Minister, Kyriakos Mitsotakis, and the US President, Joe Biden, but also in the extended talks between the two delegations.

According to government sources, the Greek side appears very satisfied with the first day of the Greek Prime Minister’s schedule in Washington, noting that the atmosphere at the meeting of the two leaders was very good, due to the fact that the US President knows the issues pertaining to the Eastern Mediterranean in-depth, he is especially interested in them, while his extremely positive feelings towards Greece were reflected both in his frequent references to the Greek-American community and in the time he devoted to these contacts.

The same sources characteristically stated that the Greek-US relations are better than ever and pointed out that Greece has an important role to play in the issue of defending and consolidating the Republic worldwide, an issue for which Joe Biden shows a lively interest in, that is, the battle between Republics and authoritarian regimes. Moreover, Kyriakos Mitsotakis is expected to dedicate a large part of his speech tonight to Congress on this issue, as the same sources emphasize.

As expected, the discussion of the two leaders revolved extensively around the Ukrainian war and the united western front against the Russian invasion, but also on how the US will practically contribute so as to make Europe independent of Russian gas. According to the same sources, there was extensive discussion about the transformation of Alexandroupolis into a regional energy hub as well as the many important US investments in Greece.

During the contact between the two leaders, it became clear, according to the same sources, that the Greek Republic has now proved its resilience as it overcame the difficult years of the economic crisis with the economy emerging stronger and the institutions becoming more shielded. The Greek side, in fact, expressed the desire for bilateral cooperation to be extended to all possible areas, while Kyriakos Mitsotakis expressed the hope that Mr. Biden will be able to visit Greece in the near future.

During the discussion of the two leaders, Kyriakos Mitsotakis provided his interlocutor with all the details of the Turkish provocation and in particular the overflights over inhabited Greek islands. “It is now clear that expansionism and revisionism have no place in an increasingly complex world,” sources said after the meeting at the White House, confirming that the issue of Turkish provocation was not raised independently, but as part of security issues in the Eastern Mediterranean.

Regarding the issue of the sale of American F-16 fighter jets to Turkey, a competent government source referred to the Greek Prime Minister’s speech given today to the Congress, stressing, however, that some issues are better not to be discussed in public. The same sources, moreover, stressed that the Greek Prime Minister openly referred to the Cyprus issue, reiterating that a two-state solution in the Megalonisos cannot be accepted.

Government sources also confirmed that in the context of bilateral defence cooperation, Athens has decided that the 5th generation fighter aircraft, which will man the Hellenic Air Force, will be the American F-35. According to the same sources, Kyriakos Mitsotakis expressed the desire for our country to join this program, clarifying that Greece is interested in purchasing an F-35 squadron before the end of this decade, and specifically after 2028, when – as was underlined – the state budget will allow for such a move.

The same sources revealed that a few days ago the company producing the F-35, Lockheed Martin, also informed in writing about its interest for Greece to join the specific program and a positive response from Athens will be given within the next few days.

“If we can agree on all the parameters, the specific aircraft will be acquired after 2028, while the best way to finance such a long-term investment for Greece in 2030 will be sought,” the same sources note, revealing Lockheed Martin’s interest in investing soon to Hellenic Aerospace Industry (HAI), essentially clarifying that there is no mention of the majority package so that the Greek state retains public control of HAI.

Common views on brave intervention in the international energy market

Among the highlights of the Mitsotakis-Biden meeting at the White House was the common views of the two leaders on the issue of reducing the price of gas internationally through the imposition of a ceiling. In fact, the two men agreed to coordinate their actions in view of the crucial extraordinary EU Summit at the end of May, hence they reportedly authorized Nikos Tsafos, appointed special adviser to the Greek Prime Minister on energy issues, and Eric Hokstein, an adviser to President Biden on energy issues, to work closely.

Regarding the Eastmed pipeline, the Greek side reiterated its positions that the final choice, that is, whether the solution of the pipeline or that of the liquefied natural gas transport will be approved, will ultimately be determined by the market and the cost. However, the warm US support for the electrical interconnections was reaffirmed, without excluding future US investments in them.