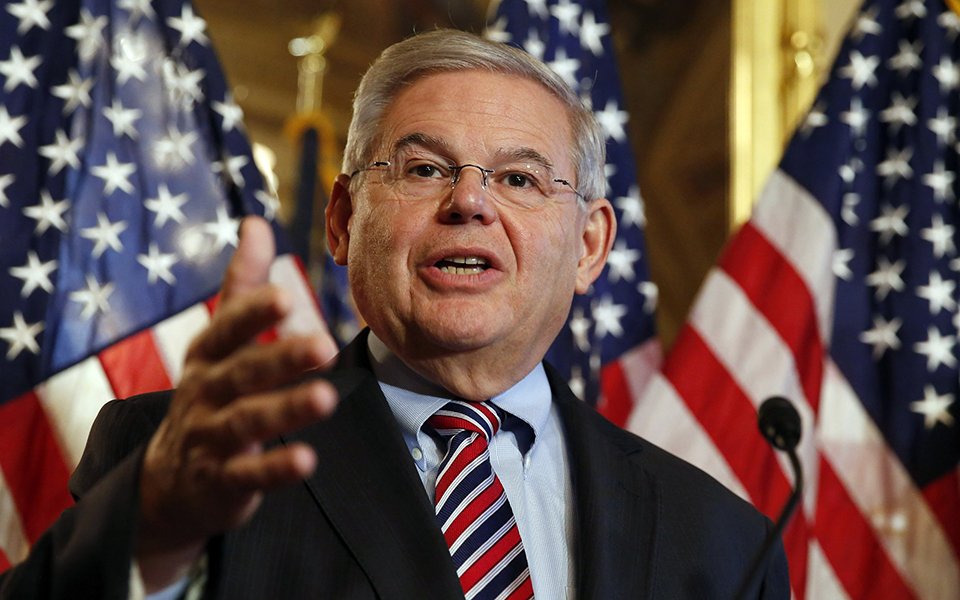 A call to the United States government and the international community to take concrete steps so as to ensure that Turkish President, Tayyip Erdogan, is held accountable for his continuous violation of International Law and human rights was addressed by Senator Robert Menendez at the US Senate.

The chairman of the International Relations Committee of the Senate condemned in the most formal way the recent threats made by the Turkish President against Athens saying that a few days ago, in front of a town hall in northern Turkey, President Erdogan threatened a missile attack on Athens. “Greece is afraid of our missiles,” he said. They say the Typhoon missile will hit Athens. And then, addressing the Greek people directly he said that this is going to happen, unless they calm down.

Menendez said that this is about a NATO member directly threatening to target Athens, a city of three million civilians. According to the United Nations, a planned attack against civilians is a war crime. And so, addressing the Senate President, Menendez asked the Senate to condemn the recent actions of the Turkish President, which are not only alarming, but also completely unacceptable.

Speaking of an aggressive campaign unfolding across the region, the Senator stated once again that he would not acquiesce to Ankara’s request to upgrade and acquire new F-16 fighter jets, demanding that Erdogan stops all overflights over Greece and withdraws all Turkish troops from Cyprus. Furthermore, he mentioned that, given Erdogan’s recent behavior, the United States should not deliver F-16 fighter jets to Turkey.

Regarding the constant threats against Greece, Mr. Menendez estimated that the escalation of incendiary rhetoric is linked to the upcoming elections in Turkey. The Senator stated that they have seen Erdogan repeatedly threaten Greek sovereignty. Erdogan’s exact words were that the Turkish forces ‘may come suddenly one night’. He seems to be increasing his illegal, authoritarian behavior in view of next year’s elections,” the Senator stated.

However, Senator Menendez argued that these are not isolated rhetorical threats, but a pattern of illegal claims that systematically challenge sovereignty over Greek territory. As he explained, this questioning of Greek sovereignty is not limited to the recent threats made against the capital of a NATO ally.

Regarding Cyprus, Robert Menendez argued that President Erdogan is attempting to divide the island even further after fifty years of illegal Turkish occupation. In this context, Mr. Menendez recalled that Turkey is attempting to proceed with the illegal opening of Varosia and to strengthen its military presence even more. In fact, at this point, he tried to link the occupation of Cyprus to that of Ukraine, as he estimated that the President of Turkey is carefully monitoring the illegal annexations of Vladimir Putin.

During his speech, Senator Menendez sought to illustrate Turkey’s divergence from Western values ​​by displaying a joint photo of Recep Tayyip Erdogan with the Presidents of Russia and Iran. He pointed out that it is no surprise that Erdogan met in Tehran this summer with the Russian and Iranian Presidents – some of the world’s most brutal dictators. “Just look at the leaders he collaborates with. This is because he shares their worldview and you can clearly see this in the way he perceives the area,” the Senator underlined.

However, the Senator’s criticisms were not limited to foreign policy issues, but covered a number of Turkey’s internal issues related to democratic backsliding combined with the violation of fundamental freedoms and human rights. In fact, he pointed out that Erdogan has revenge tendencies inside (the country) as well, as just last week, one of his political rivals – the popular mayor of Istanbul – was sentenced to two and a half years in prison. The penalty? An insult against members of the Supreme Electoral Council. And in case the message sent through the prison sentence was not clear enough, the court also imposed a political ban on the mayor. Erdogan may be using this aggression and repressive policy to distract from the total failure of his economy. He may do it out of malice or because he himself is a villain. Yet, one thing is clear – the United States must take the Turkish President’s actions seriously.

With this in mind, the chairman of the International Relations Committee called for fair and free elections in Turkey, calling on the international community and US allies to:

Towards the end of his speech, Mr. Menendez acknowledged that his stance on the F-16 issue does not make him particularly popular in Ankara, recalling that President Erdogan has criticized him, calling him an enemy of Turkey. However, he argued that standing up to human rights violations makes him an enemy of Erdogan. If criticizing Turkey for arming Azerbaijan, allowing the slaughter of innocent Armenian civilians, and asking Turkey to recognize Greek and Cypriot sovereignty make him an enemy of Erdogan, then it’s a role he will accept with honor.

In closing, the Senator sent out the following messages: