Limassol riots | The seven arrested sent free – Condemnation by the Police Association and the Minister of Justice
Defence Redefined
Published on 29/10/2020 at 16:40

The seven persons initially arrested for the “street-war” in Limassol after the riot against the measures taken for the coronavirus and corruption were released.

The reasoning of the decision of the Limassol District Court states that all those arrested were located at a long distance from the scene where a police patrol car burned and police officers were injured and there is no direct evidence linking them to the events. The seven were therefore released without charges.

However, the investigation of the case continues by the Police, while two other persons are wanted.

We recall that members of the Police proceeded yesterday to arrest seven young people for the rioting and the incidents resembling a “street-war” that took place last night in Limassol.

During the incidents, five members of the Police were injured, including a member of the Fire Service, Molotov cocktails were set on fire in a police vehicle, while objects were damaged by throwing objects at four citizens’ vehicles and three other police vehicles.

The incidents took place around 19:00 on Wednesday night, at a point of the coastal road on October 28th. A number of citizens were protesting in the area. As the protest marched towards the Limassol Marina, about 100 people detached themselves from the protest and started throwing Molotov cocktails, crackers and flares along the 28th of October Street, in adjacent streets and in the Epichosi area, resulting in the engagement of the anti-rioting police teams.

The Cyprus Police Association (CPA) and the Association of Senior Police Officers of Cyprus (ASPOC) as well as the Minister of Justice condemned the unacceptable events.

Among other things, CPA and ASPOC stated that “… in addition to the verbal condemnation of the provocative and unacceptable events that regularly occur to our members during the performance of their duties, we call on the competent authorities and the Cypriot state in general to strengthen morally and in practice the police and its members and to take all appropriate actions, which will contribute to their maximum safety and protection.

Finally, CPA and ASPOC would like to assure the five colleagues and their families that they are by their side and wish them a good recovery and a quick return to their duties.”

The Minister of Justice, in a statement on social media, unequivocally condemned the events of yesterday’s demonstration.

Also read: Cyprus Police Association | “Next goal, the upgrade of the stairs at all levels”

The exercise scenario included a virtual downing of a friendly helicopter in an enemy area, survival operations of pilots in enemy territory… 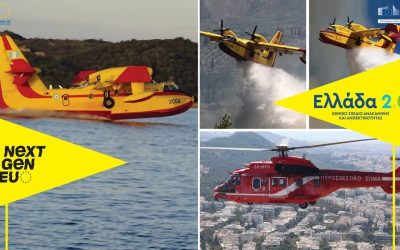 In a recent post on its Facebook page, the European Commission in Greece reveals that it is going to finance the modernization…