INTERNATIONAL RELATIONS
Kosovo – Serbia | Tension in relations between Belgrade and Pristina over Serbian license plates in northern Kosovo
Defence Redefined
Published on 01/08/2022 at 09:14 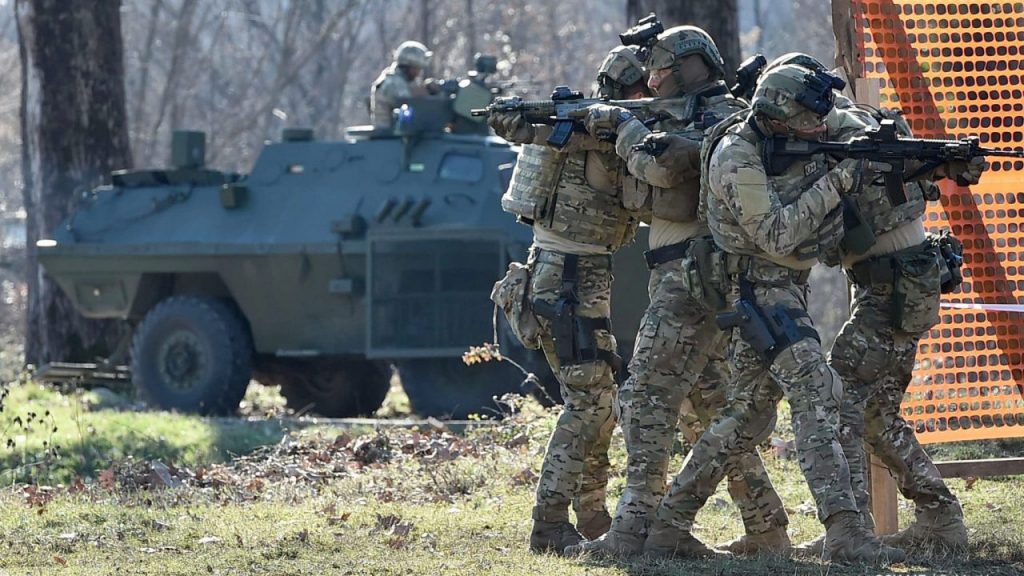 The decision by Pristina to replace all Serbian license plates is causing tension in northern Kosovo.

On Sunday afternoon, sirens sounded in all the towns of northern Kosovo, where Serbs form a majority. Two main roads leading to the administrative border with Serbia were blocked by Serbs, who set up barricades by heavy parking trucks.

The Serbs blocked the roads after receiving information that the special forces of the Kosovo Police were heading towards the administrative border with Serbia. This information was denied by the commander of the northern sector of the police of the city of Mitrovica, Besim Hoti.

Strong police forces and soldiers of the international peacekeeping force KFOR have been deployed along the Ibar River that separates the northern and southern parts of Mitrovica.

It is noted that early in the afternoon fake news from Ukraine and Russia about armed clashes between the Serbian Army and Albanians in northern Kosovo, where there were also casualties, was being disseminated.

Also read: Kosovo | The decision not to set up ballot boxes for the Serbian elections sparks tension

However, yesterday’s spark seems to cease for the moment, with American intervention in Kosovo, highlighting once again the danger of a more general escalation.

The government of Kosovo decided early today to postpone for a month the implementation of new rules on the border with Serbia, which caused tensions yesterday in the northern part of the country. The postponement was announced by the government after a meeting with the US ambassador to Kosovo, Jeffrey Honevier.

The new rules, which were to come into effect today, required anyone entering Kosovo with a Serbian identity card to obtain a 90-day stay permit. Pristina also gave Kosovo Serbs two months to replace the Serbian license plates on their cars with Kosovo ones.

Kosovar Prime Minister, Albin Kurti, on Sunday spoke of retaliatory measures as Serbia – which does not recognize the independence of its former majority-Albanian province declared in 2008 – demands equal treatment from Kosovars entering its territory.

In its statement, the Kosovo government demanded that “all roadblocks be lifted and freedom of movement be fully restored” today. He also thanked international actors, especially the US ambassador in Pristina, for their mediation to de-escalate the tension.

On behalf of the EU, the head of European diplomacy, Josep Borrell, welcomed via Twitter the decision made by Pristina, calling, in turn, to “remove all roadblocks immediately”.

The President of Serbia, Aleksandar Vucic, after a midnight meeting with the leadership of the Armed Forces, said he was satisfied that sense had prevailed. “We are working to calm things down, this is the most important thing for us and no matter how difficult it is, we are not giving up; in the end, Serbia will win,” said Mr. Vucic.

For his part, Albin Kurti accused Mr. Vucic of inciting “riots”. “The next hours, days, and weeks may be difficult and problematic,” the Kosovar Prime Minister warned via Facebook.

The NATO force in Kosovo, KFOR, announced yesterday Sunday that it is closely monitoring the situation and is ready to intervene if stability is threatened. Italian soldiers were seen in Mitrovica yesterday. The North Atlantic Treaty Organization force has some 3,770 military personnel.

In 2013, the parties agreed to start a dialogue with EU support to resolve their differences and normalize relations, but little progress has been made.

Russia also intervened in the dispute, calling on the political leadership of Kosovo to stop the provocations, considering that the decision to replace Serbian license plates and Serbian police ID cards is an attempt to expel the Serbian population from Kosovo.

Commentary by the spokeswoman for the Russian Foreign Ministry, Maria Zakharova, refers to the decision on the Serbian documents and points out that “Kosovo’s leaders know that the Serbs will not remain idle when it comes to a direct attack on their freedoms and are deliberately escalating in order to implement a scenario of violence.

It goes without saying that Belgrade is also on the razor’s edge of the attack, which the West also wants to ‘neutralize’ with the hands of the Albanians of Kosovo. We call on Pristina and the US and the EU, which are behind it, to stop provocations and respect the rights of Serbs in Kosovo,” the Russian statement added.

This development of events is another proof of the failure of the mediation mission of the European Union. It is also an example of the position they have prepared for Serbia in the European Union, suggesting that Belgrade de facto reconcile with the deprivation of its compatriots’ rights.”