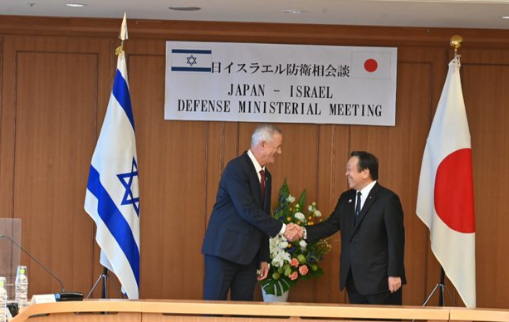 Israel’s defence exports to Japan are expected to increase as the Asian country signals intent to boost military spending amid more assertive Chinese provocation in the region.

Tokyo has been reviewing the ceiling of its Armed Forces budget amid growing concern that Russia’s invasion of Ukraine will embolden China to threaten neighbouring self-ruled Taiwan.

Israeli Defence Minister, Benny Gantz, noted the shift in Japanese policy as he completed a two-day visit to Tokyo with the signing of a bilateral defence cooperation memorandum.

“There will be actual ramifications to this, both on the military level, in research and development and also on the level of defence industries down the line,” he told reporters.

I was honored to be hosted by my Japanese counterpart, Minister Hamada at the @ModJapan_en. We signed a Memorandum of Defense Cooperation, which will enable Japan and Israel to expand defense ties in the defense equipment, technology and military arenas. pic.twitter.com/PhFpYn7oMy

In a separate briefing, a Japanese defence ministry official said Gantz and his hosts had “agreed to continue looking at ways in which the two countries can cooperate in defence,” but that they had not discussed any specific projects or procurement deals.

Israeli defence exports reached an unprecedented amount of $11.3 billion in 2021, according to the Times of Israel news site. This made Israel the world’s 10th-biggest defence exporter, the site reported.