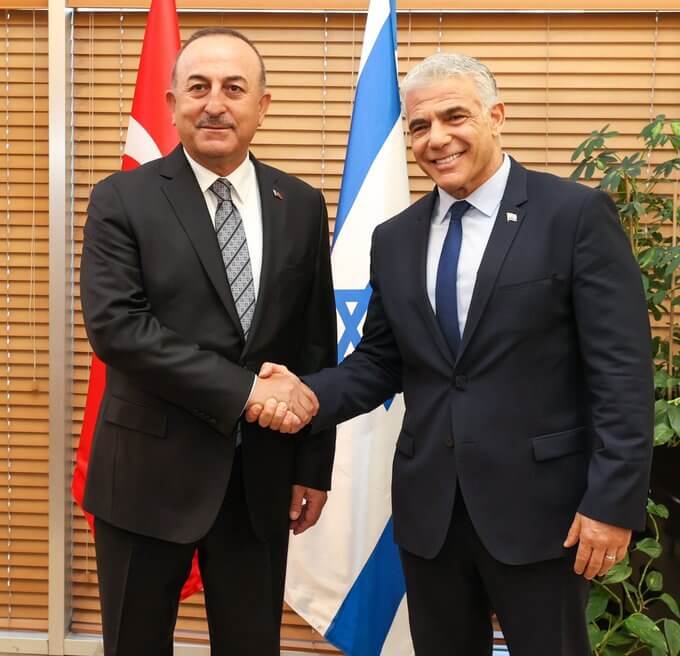 Israel and Turkey are opening a new chapter in their relations, Israeli Foreign Minister, Yair Lapid, said in a statement after meeting with his Turkish counterpart, Mevlüt Çavuşoğlu, in Tel Aviv.

Mr. Lapid spoke of expanding the two countries’ economic ties, according to Reuters. He noted that Israel and Turkey intend to work on a new civil aviation agreement.

For his part, Mr. Cavusoglu said that the normalization of Israeli-Turkish relations will help in the talks for a solution to the Palestinian issue. As he said, the only option for peace is the two-state solution.

Speaking at a news conference after talks with his Israeli counterpart, Cavusoglu said the two countries had agreed to “revitalize” relations in a number of areas, including the resumption of civil aviation talks.

No prospect for Israeli-Turkish energy cooperation

However, the Times of Israel reported on Tuesday that the absence of Turkish Energy Minister, Fatih Donmez, from the Turkish delegation led by Turkish Foreign Minister, Mevlüt Cavusoglu, indicates that there are currently no prospects for Israeli-Turkish energy cooperation.

Ankara would like to diversify its energy sources by importing natural gas from Israel via a submarine pipeline, but Israel is not discussing that.

Also read: Turkish Foreign Minister to visit Israel on May 24 amid Israeli-Palestinian hostilities