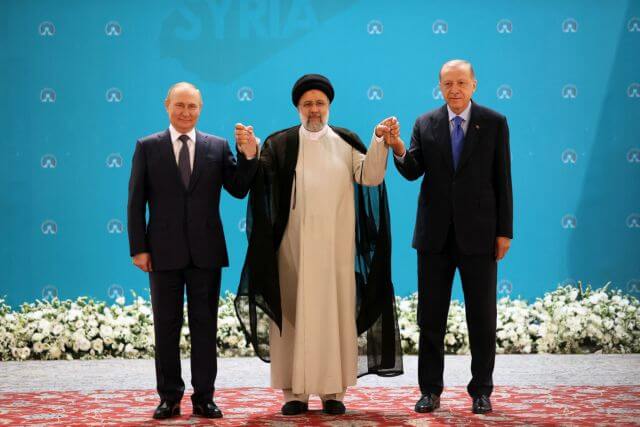 Iran, Russia, and Turkey pledged to continue their cooperation to “exterminate terrorists” in Syria, according to a statement issued on Tuesday at the end of a tripartite summit in Tehran.

According to APA MPA, the three countries “rejected all illegal self-determination initiatives” and “showed their will to oppose separatist aspirations that could undermine the sovereignty and integrity of Syria” and threaten the security of neighboring countries, the statement added.

Meanwhile, Russian President, Vladimir Putin, meeting with Iranian President, Ebrahim Raisi, and Turkish leader, Recep Tayyip Erdogan, in Tehran, called for more unity in Syria policy and accused the West of meddling. The West “has charted a path to dismember the country,” Putin said. This should be opposed jointly by Russia, Turkey, and Iran.

Also read: Syria | Turkish outpost at a breathing distance from the Syrian and Russian forces

“The situation is particularly alarming in the territories not under the Syrian authorities,” Putin said, adding that there is an increased risk of extremist and separatist action in these territories. “In many ways, the destructive line of Western states, led by the US, encourages this,” Putin said. Ankara, Moscow, and Tehran should therefore do everything to make the return of these areas to the control of the “legitimate government” possible.

This request is also likely to be seen as counter to Turkey’s aspirations to gain more influence in northern Syria. Turkey will soon continue its “battle against terrorist organizations” in Syria, Turkish President, Recep Tayyip Erdogan, who has been threatening to intervene in northern Syria for months, said yesterday from Tehran.

“It must be clear to everyone that there is no place in the region for separatist terrorist movements and their accomplices. We will soon continue our battle against terrorist organizations,” warned the Turkish President speaking at the end of the tripartite Summit, flanked by his Russian and Iranian counterparts.

According to the French newspaper Le Figaro, the Iran, Russia, and Turkey Summit in Tehran is “another step in strengthening an anti-Western pole” despite the significant differences between the three states.

The French newspaper notes that the Turkish President traveled to Tehran to get the green light to launch a “special operation” against pro-Kurdish militant groups in northern Syria, hoping to be heard by Putin, wanting at the same time to play a mediating role in the Ukrainian conflict and particularly in the control of the transport of 20 million tons of Ukrainian grain, which would help prevent a global food crisis.

The agreement reached at the UN with the approval of Moscow and Kyiv will be the subject of bilateral talks between Erdogan and Putin, the newspaper said, noting that a new meeting could follow on Wednesday or Thursday in Constantinople.

As for the Iranians, it is pointed out that Ibrahim Raisi has long wanted to buy fighter jets and anti-aircraft missile squadrons from Russia and that in the case of Syria, they support – like the Russians do – the Assad regime. Taking advantage of the war in Ukraine, Iran is trying to consolidate its influence in the region through Shiite militias.

Also, Iran and Russia discussed oil and ways they could circumvent the Western economic sanctions they both face.

It is also reported that, according to the US State Department, Russia could acquire several hundred unmanned combat aerial vehicles from Iran, which it lacks in the war against Ukraine.

As for the Russians, it is noted that the Tehran Summit shows the West that, despite sanctions, Putin is still able to build alliances and participate in international meetings, while also reminding Ukraine’s American and European allies that a large part of the world supports the Kremlin’s fight against Ukraine.

The creation of an anti-Western front is, according to the French newspaper, the main issue, noting that the fight against the West is a given in Moscow and Tehran, but more subdued in Ankara, which officially remains a staunch NATO ally.