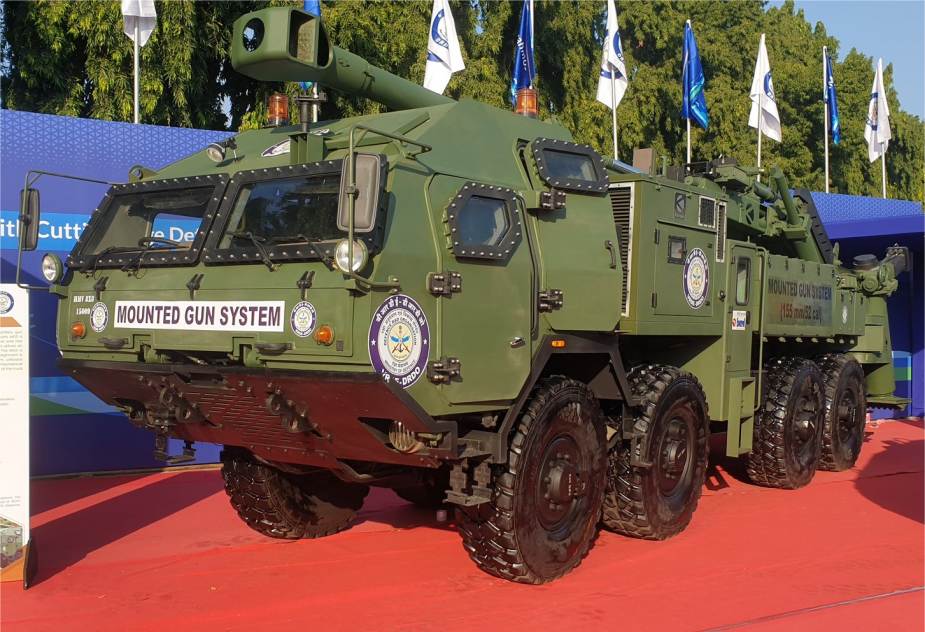 The MGS is based on an 8×8 military truck chassis HMV (High Mobility Vehicle) 15009 and features a special version of the 155 mm 52-calibre ATAGS (Advanced Towed Artillery Gun System) mounted in the rear of the truck chassis. The 8X8 vehicle has been entirely developed by Ashok Leyland, an Indian multinational automobile company.

According to sources of the Indian Defence Industry, the MGS is fitted with state-of-the-art technologies such as an Automatic gun alignment and positioning system, integrated Fire Control System (FCS) compatible with the Indian-made “SHAKTI” Artillery Combat Command and Control System (ACCCS), ammunition handling system and onboard silent electric power system.

The ATAGS gun features an electric engine which, according to Indian Defence Ministry sources, ensures reliable operation for longer periods of time.

The armored cab provides protection against the firing of small arms and artillery shell splinters, while the rear part of the truck hosts the ATAGS gun system and 24 projectiles along with charges for firing. All the firing operations can be performed from inside the crew cab.

The MGS also has a “shoot-and-scoot capability”, an artillery tactic of firing at a target and then immediately leaving the location where the shots were fired from to avoid counter-battery fire from enemy artillery. As such, the MGS can be ready to fire the first round in less than 80 seconds and leave its firing position in less than 85 seconds.

It is pointed out that the ATAGS is a project launched by the Indian DRDO in 2013 to replace older guns in service with the Indian Army. ATAGS will be capable of programming and firing future long-range guided munitions (LRGMs) for high-precision, deep strike.

The system is currently in an advanced stage of development.

Also read: ZUZANA-2 | The successor of the self-propelled gun-howitzer acquired by the National Guard