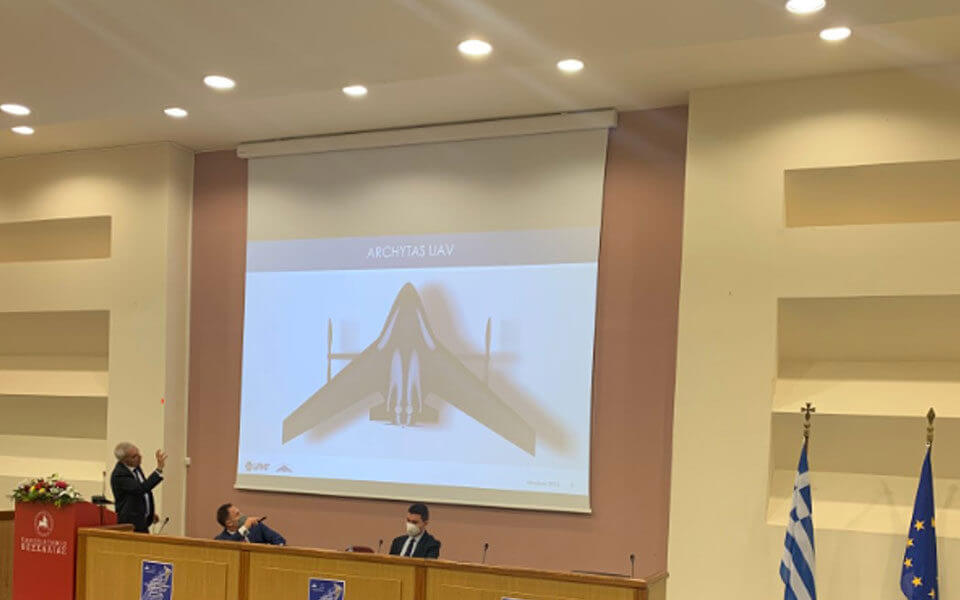 As announced by HAI (01/04/22), a meeting was scheduled by the Office of Associates of the Minister of Finance for Research and Innovation, the Hellenic Aerospace Industry, and the University of Thessaly, where new aspects of the innovative program “Archytas” were presented. The program will upgrade the country’s defence and security.

The topic of the meeting was “Cooperation of the Hellenic Aerospace Industry with Universities and Research Centers: A necessary condition for a strong Greece” and took place at the University of Thessaly in Lamia.

The first VTOL UAV with vertical take-off and landing capabilities is expected to fly in the Greek skies in about two years, the announcement added.

It is emphasized that the platform will strengthen the surveillance of land and sea borders, while it can be used for civil protection purposes and for many other commercial uses. It is an aircraft with Vertical Take-Off and Landing (VTOL) capabilities, features that have not yet appeared in the field of UAVs.

The program is fully funded by the Ministry of Finance. The Minister of Finance, Christos Staikouras, underlined in his speech at the meeting that “the effort continues and expands, so that our country enters the international arena as a certified designer and producer of high and innovative technology products. It is clear,” he continued, “that this course will bring multiple benefits to the stakeholders, the Greek economy and the country as a whole.”

For his part, the Minister of Development, Adonis Georgiadis, pointed out: “HAI can play a leading role in the critical sector of high technology, something that seems to be the future of the countries’ defence”.

HAI CEO Dimitris Papakostas stated that “HAI pursues an extroverted trade policy that competes worthily in the international environment and has become an important exporter, contributing to the inflow of foreign exchange and the strengthening of GDP.”

Also read: Javelin | The anti-tank missile that has become a symbol of the Ukrainian resistance