NEWS
HAI | Important contacts of the President with the political and military leadership of Cyprus – “An uptrend in development”
Defence Redefined
Published on 19/05/2022 at 09:05 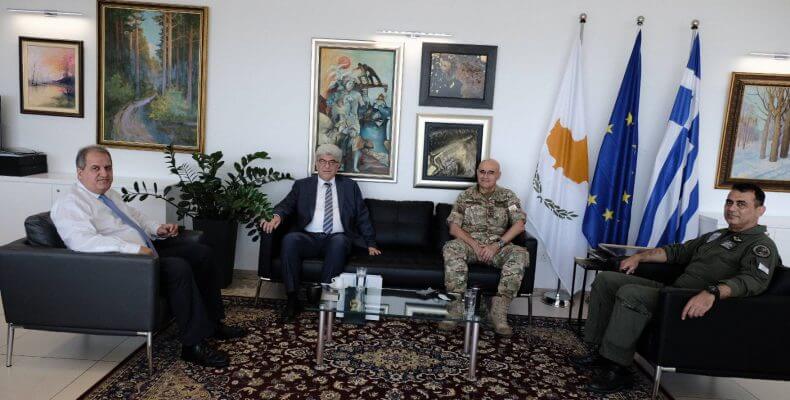 The President of the Hellenic Aerospace Industry (HAI), Air-Marshal (ret.) Ioannis Koutras paid a two-day visit to Cyprus, where he had successive meetings with the political and military leadership of the Republic of Cyprus (12-5-2022).

Talks focused on the common national defence policy and on finding ways to assist HAI, specifically in matters of support to the forces of the National Guard and the Air Force Command of Cyprus as well as the Ministry of Defence in general.

Finally, a presentation was made on the high-quality standards in products and services of HAI, during which it was pointed out, among other things, that HAI is the only Greek body that participates in the HELLAS SAT program.

In fact, in a recent announcement, HAI emphasizes the fact that “there is an uptrend in development.”

On the occasion of inaccurate publications, which, apparently deliberately, attempt to discredit HAI, the Company states the following:

HAI clearly, and through its results, is not under dissolution, but on an upward trend.

HAI, therefore, with its total backlog reaching 840 million euros and with excellent prospects to exceed 1 billion euros, with its programs and its huge potential and prospects, creates and offers new highly-skilled jobs, in order to give opportunities to the young people of Greece. The Company has already reversed its detrimental results and is offering, at a profit, to the National Economy.

As for the recent catastrophic reports in some media regarding the program of delivery of a sufficient number of C-130 aircraft to the Hellenic Air Force, we point out the following:

The aircraft are essential for the National Security and Defence of the country. Especially, after the tension in the Greek-Turkish relations and the war in Ukraine, it is a national need to restore the navigability of these aircraft.

Since 2015, the maintenance of the aircraft has been pending at Tanagra Airport and the HAI, apparently by decision and responsibility of the then holders, despite the fact that the needs of our Air Force were imperative.

HAI and its current management, with a sense of responsibility, advocated a self-evident solution, as applied worldwide and to other companies, of seasonal contract staff, to quickly restore the national need for the availability of C-130s. After successive meetings with the leadership of the Ministry of Defence, the Board of Directors of HAI was authorized to seek the best solution.

Thus, according to Law 4412/2016, which enables the acceleration of procedures in cases of urgent need, such as this one, HAI, after thorough research of the Greek and international markets, ended up in a Greek company, giving domestic added value to the program. The company has experience in large aircraft as well as in the C-130s of Saudi Arabia and will use privately certified engineers, former executives of the HAI, and the Hellenic Air Force.

Upon the completion of the Company’s recruitment program, it will be possible to use exclusively HAI personnel for aircraft maintenance. It should be noted, of course, that HAI announced in 2021 seventy (70) technician positions for the maintenance of the C-130; however, only ten (10) vacancies were filled due to a lack of critical specializations for this program.

HAI aims to restore and develop its previous capability to cover all C-130s of the Hellenic Air Force as well as other countries. With the establishment of the C-130 International Maintenance Center, HAI will make the best use of its Factory Maintenance Certificate from Lockheed Martin, as the only company in the Eastern Mediterranean and the Middle East region.

In conclusion: HAI, employees, and management operate solely on the basis of national interest and the promotion of the enormous potential of a Greek pioneer and innovative aerospace industry with an international scope. Those who try to tarnish and devalue its course will be tragically alone. HAI, whether they like it or not, will proceed with all its forces in the service of the warriors of the Armed Forces of the country.