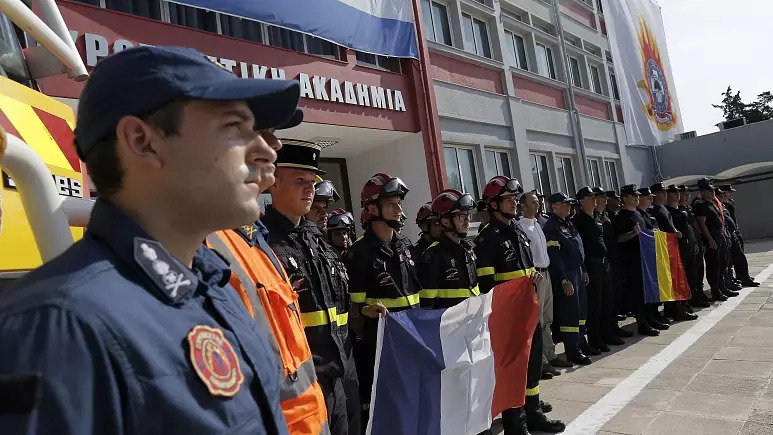 European solidarity is evident in the response to wildfires in Greece, as upon the departure of Romanian firefighters, who have been in our country since the beginning of July, the French have also arrived.

The mission of 25 French firefighters – with mechanized vehicles – who will be in Athens until the end of August as part of the pre-positioning pilot program implemented through the European Civil Protection Mechanism with the support of the European Commission, was welcomed by their Greek colleagues in a special ceremony held at the facilities of the Hellenic Fire Academy. The ceremony was held in the presence of the Minister of Climate Crisis and Civil Protection, Euronews reports.

“Your presence proves once again how strong the bond between the Greek Fire Service and the French firefighters is, confirming the strong historical ties between the two countries,” said Mr. Stylianidis adding that this program is proof of European solidarity.

“Despite our own difficulties, we are still rushing to help our brothers who are members of the European family,” said the Minister as a few days ago Greece managed to send two Canadairs to France to combat the wildfires raging in the south-west of the country.

For his part, the head of the French mission, Sylvain Seval, said: “We will be in Greece to help your country combat wildfires. We have come with our equipment, so that we can go anywhere and join the battle.”

At the same time, the French delegation farewelled all 28 colleagues from Romania, who left for their country immediately after the end of the welcoming ceremony.

It is noted that in Tripoli there is a corresponding mission from Norway with 27 firefighters, who will be deployed in two shifts, while 48 of their colleagues from Finland are also expected.

Finally, Jordan sent a Mi-26 helicopter to Greece in an attempt to extinguish wildfires.

The firefighting helicopter, which was sent at the initiative of the King of Jordan and the Jordanian government, has been in our country since July 29, it consists of a 16-member crew and will remain in Greece for a few more days, so that it can operate immediately if needed.