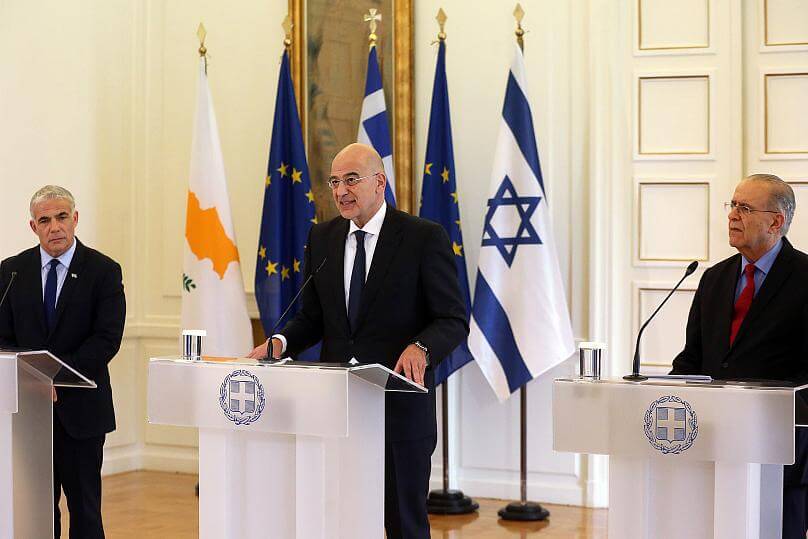 The Tripartite Meeting of the Foreign Ministers of Greece, Israel, and Cyprus was completed yesterday shortly after 16:10.

The extended talks in the framework of the Tripartite Meeting of the Foreign Ministers of the three countries, Nikos Dendias, Jair Lapid, and Ioannis Kasoulidis, commenced at 15:30 in the “Ioannis Kapodistrias” room of the Ministry of Foreign Affairs and focused on further strengthening the countries’ close cooperation in several sectors such as energy, civil protection, the economy and the fight against terrorism with the ultimate goal of promoting peace, security, stability, and prosperity in the Eastern Mediterranean.

The three Ministers also discussed security challenges in the wider region as well as the scope for expanding cooperation with the participation of other states.

The readiness of Cyprus to participate in any initiative aimed at restoring the good neighborly relations of the states of the region, based on the common observance of the principles of International Law, was expressed in Athens by the Cypriot Minister of Foreign Affairs, Ioannis Kasoulidis.

During the joint statements after the end of the Tripartite Meeting of the Foreign Ministers of Greece, Israel, Cyprus, he stressed that regional cooperation is the common denominator of all regional integration efforts, “for which Cyprus will continue to work and will continue to cooperate so as to build alliances in critical areas, energy, climate, and security.”

Referring to his belief in the enormous potential for dialogue in the integration of the region, he acknowledged that no one could have imagined the rapid pace at which these regional alliances would develop. In particular, he referred to the Negev meeting, describing it as historic, but also to the meetings of Sharm el Sheikh and Aqaba. They are all concentration points of important factors in our region, he added.

Focusing on the tripartite cooperation mechanism of Greece, Israel, and Cyprus as well as its expanded form, with the participation of the USA, he stressed that it is proof of the geostrategic importance and the intrinsic value of this partnership. As for the Russian invasion of Ukraine, he condemned it and spoke of a world that is changing dramatically and that the certainties of yesterday no longer exist. In this context, he congratulated Nikos Dendias on his “courage to visit Odessa, a city that symbolizes the freedom of the Greek people, because the revolution began there.”

He further condemned the recent terrorist attacks in Israel and expressed his solidarity with the families of the victims and the people of Israel, saying that violence and terrorism, whether instigated by states or not, could not stop the “monumental course of regional cooperation”.

The Minister of Foreign Affairs of Cyprus made a special reference to the tripartite energy cooperation. He stressed that energy cooperation is viewed from a new perspective due to the war in Ukraine and stressed that the three countries should be part of the solution in Europe’s effort to find cleaner energy from the Levante axis, while emphasizing the interconnecting pipeline.

Finally, Ioannis Kasoulidis briefed his counterparts on the latest developments in the Cyprus issue. “Our position is consistent that as soon as Turkey lifts all the obstacles to resolving the Cyprus issue, we will be able to develop good neighborly relations that will benefit regional stability and security,” he said.