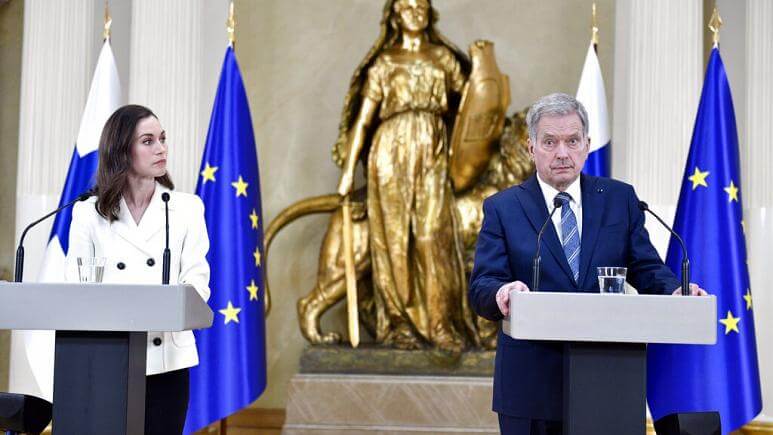 Finland will seek NATO membership, the country’s President and Prime Minister announced yesterday, which is a direct consequence of the Russian invasion of Ukraine.

“We have jointly decided that Finland will apply to join NATO,” said Finnish President, Sauli Niinisto. The Finnish parliament is due to consider the accession plan today, Monday, and then a vote will take place.

The support of Prime Minister Sana Marin’s Social Democrat party for the country’s accession was announced on Saturday and the vote among the 200 Finnish MPs is expected to have a positive effect on membership.

On Saturday, the Finnish President had called his Russian counterpart, Vladimir Putin, to inform him of his country’s forthcoming accession request, which is threatening retaliation from Moscow.

“I or Finland are not used to hiding (…) It is better to say straight what has already been said and that is what I wanted to do,” Niinisto said about the telephone communication between them. The Russian President pointed out that joining NATO “would be a mistake”, as he believes that there is no threat to Finland’s security, according to the Kremlin.

In Finland, the war in Ukraine turned into a historic leap in support of NATO membership for better protection from Russia, with which the country shares a 1,300-kilometer border. According to the latest polls, the percentage of Finns who want their country to join the alliance has exceeded three quarters, i.e. it has tripled compared to the percentage prior to the war in Ukraine.

Why Finland is not a member of NATO

Finland gained its independence from Russia in 1917 and faced it in two wars, during which it lost part of its territory to Moscow. Finland signed a Friendship, Cooperation, and Mutual Aid Agreement with Russia in 1948, consolidating a degree of economic and political dependence and remaining militarily isolated from Western Europe.

The end of the Cold War, which led to the dissolution of the Soviet Union, allowed Finland not to be threatened by Russia as the threat from Moscow diminished. Thus, Helsinki relied on its own military deterrence and friendly relations with Moscow to maintain peace. Yet with Russia’s invasion of Ukraine, which Moscow calls a “special military operation,” Russian President, Vladimir Putin, seems far from friendly.

Finland switched from formal neutrality to military non-alignment in 1995 when it joined the European Union. In fact, Finland has become increasingly close to NATO in recent years, exchanging intelligence and participating in alliance exercises in response to an increasingly aggressive Russia.

Joining the Alliance will bring Finland under the umbrella of Article 5, which guarantees that an attack on a NATO ally is an attack on everyone.

“NATO doors are open and we will welcome Sweden and Finland with open arms,” stressed the German Foreign Minister, Analena Baerbock, and assured that the allies will take care of the ratification process as soon as possible.

For his part, NATO Secretary-General, Jens Stoltenberg, said that as long as the process lasts, the Alliance will strengthen its presence in the wider region.

The Foreign Minister also assured that Germany will do everything possible to make the sensitive transition phase last as short as possible and that there is no “gray zone” at all. The federal government, she explained, will implement a “fast track” assuming that the Parliament will do the same.

Regarding Russia’s threats to Finland and Sweden, the NATO Secretary-General noted that the Alliance’s military presence in the eastern and Baltic regions has increased, as has airspace surveillance and preparedness for a possible hybrid or cyber attack.

Finland and Sweden are concerned about the transition period from the submission of the application to the ratification of the Accession Protocol by all allies, Stoltenberg said, and as to the reservations expressed by Turkey regarding the possibility of accession of Sweden and Finland to the Alliance, Mr. Stoltenberg noted that “Turkey has made it clear that it does not intend to block accession.”

With information from: Euronews, defenceredefined.com.cy

Also read: NATO | One step before Finland joins the alliance