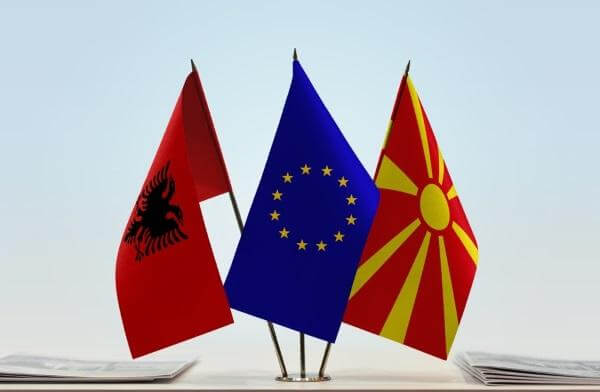 The die has been cast for the accession talks of Tirana and Skopje with Brussels.

The last hurdles were overcome, but now Albania and Skopje will sit with the unanimous opinion of all 27 at the negotiating table with the European Union, Euronews reports.

“We can now proceed to the next stage of the accession process with these two countries. This means the start of accession negotiations. My feeling is that there is a greater openness to admitting new members to the EU… But of course, these new members will have to convince the existing ones not only to draw up but also to fulfill all the conditions,” said Oliver Varghelli, Εuropean Commissioner for Enlargement and Neighborhood.

The last pitfall was from the side of Sofia, which demanded constitutional amendments from Skopje to recognize that the language has Bulgarian roots, recognition of a Bulgarian minority, and repudiation of any intolerant behavior and practice against Bulgaria.

“If Europe wants to live in security, prosperity, and stability, it should aim for the integration of its neighborhood, the Western Balkans. This war in Europe, Russia’s aggression against Ukraine, has proven the value of all this,” he concluded.

Both Albania and Skopje have been heavily criticized for being slow in implementing required reforms. However, in Brussels they believe that, according to the new geopolitical conditions, the procedures could be accelerated.

The President of the European Commission noted that after the Intergovernmental Conference taking place today, the Commission and the negotiating teams from Albania and North Macedonia “will start working. The review of the EU acquis will begin. This is the first step in the process,” according to Kathimerini. In addition, she mentioned areas of cooperation with the two countries.

She added that for her part, “North Macedonia will very soon negotiate the Frontex agreement with us. So it is about the deployment of Frontex in North Macedonia. This will strengthen our cooperation on immigration.” Finally, she spoke of boosting investments and closer cooperation in energy and transport.

Skopje and Albania have been candidate countries since 2005 and 2014 respectively.