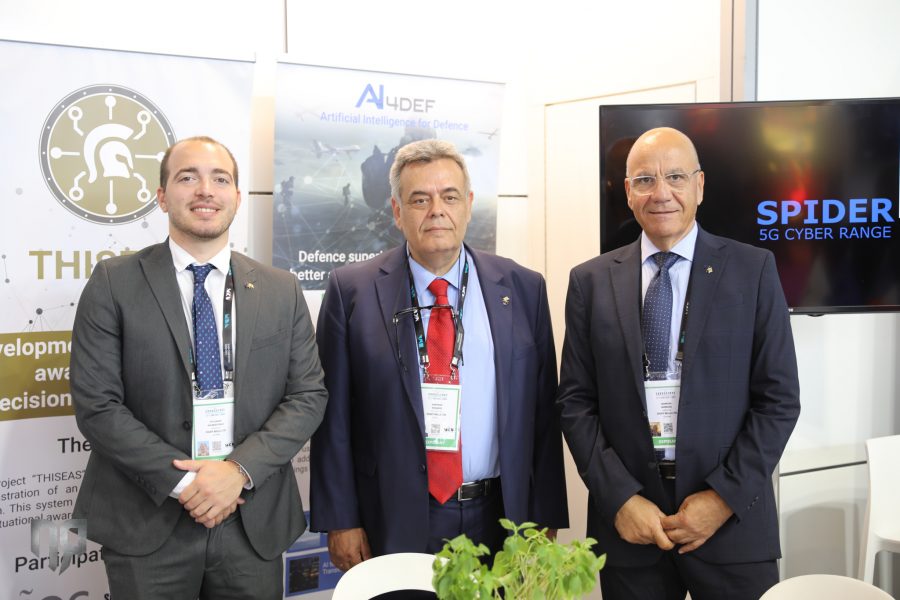 EIGHT BELLS LTD was founded in 2016 and has offices in Nicosia (Headquarters) and Athens. It is an independent research and services company specialising in information and communication technology, but also in simulations and analysis. It has developed a variety of systems and applications, some of which stand out for their contribution to the field of security and defence.

Among others, the company developed and designed the 8BMGT and 8BUGM. The 8BMGT (Maritime Gimbal Thermal Camera) is a gimbal-mounted dual sensor camera (thermal and colour camera) designed and developed solely by Eight Bells.

It detects the thermal radiation of objects and humans and can be used both for ground and maritime surveillance purposes. It has a high-definition colour camera with x10 focus, a thermal camera and a laser range finder (LRF). 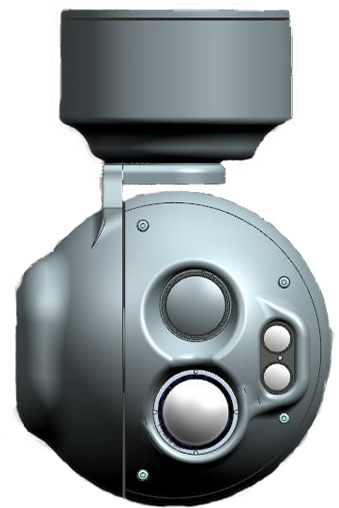 The 8BMGT captures images and video while its size and design make it suitable for use in vessels. It can be used for coastal surveillance and surveillance in borders that are vulnerable to illegal migration flows, for the protection of critical infrastructure while it can also be used for search and rescue purposes. Furthermore it can be used for early fire warning in forests.

Eight Bells also developed the 8BUGM, a similar system for use in unmanned aerial vehicles. With similar specs as the 8BMGT, the 8BUGM weighs 3 kg while its compact size (16 cm high and 10 cm long) makes it ideal for integration into unmanned aircraft. It can provide a complete picture by upgrading aerial surveillance capabilities where necessary. 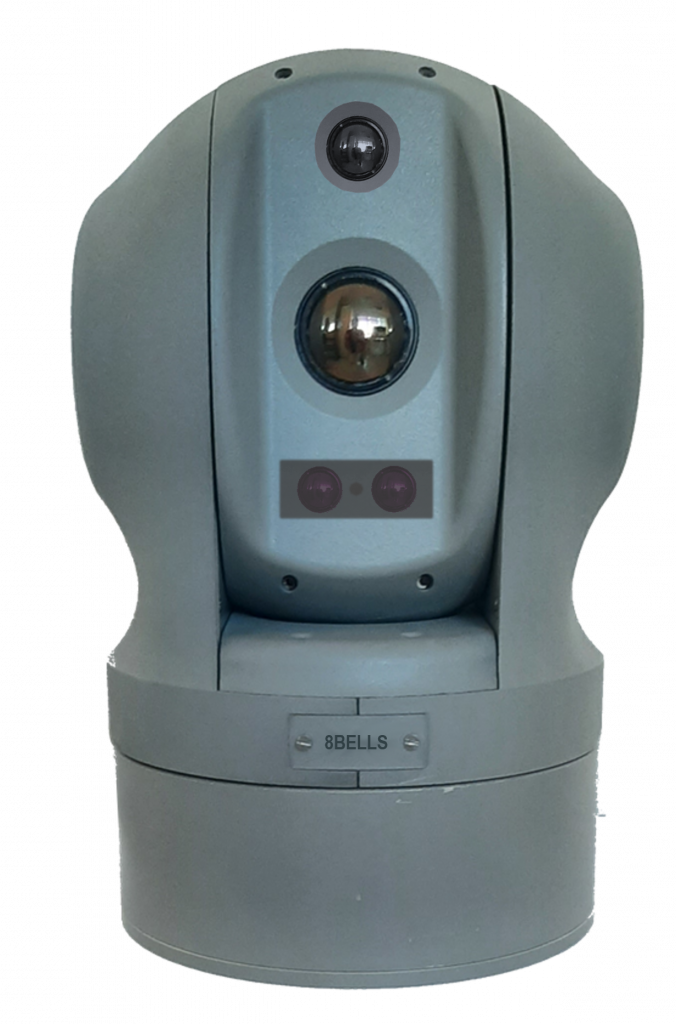 In addition, the company also developed the XBELLO, an easy-to-use and above all secure communication application. ΧBELLO allows the exchange of messages, data and group calls, with a reduced risk of malicious interception. It can be deployed in private servers, while it is compatible with smartphones, computers and tablets.

Cooperation with the Ministry of Defence of the Republic of Cyprus

Eight Bells participates in the THISEAS, collaborative project which concerns the development and demonstration of an electronic situational awareness and decision-making support system. EIGHT BELLS participates in THISEAS together with the KIOS Research and Innovation Centre of Excellence (KIOS CoE) of the University of Cyprus, SignalGeneriX and CYENS. The project is co-financed by the Ministry of Defence via the “Athena” program. 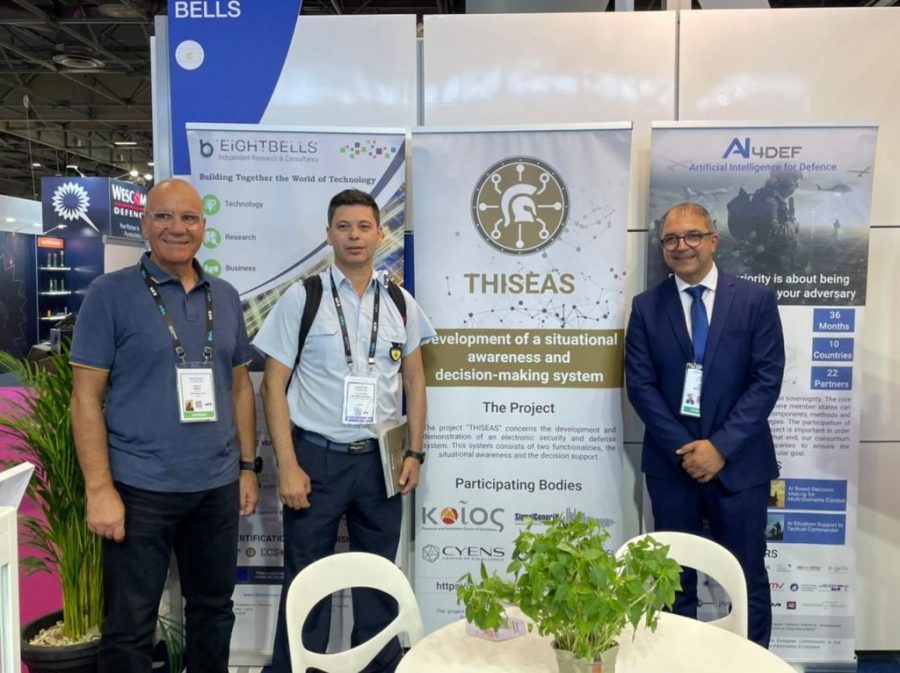 The European program AI4DEF (under the EDIDP) aims to examine the benefits of applying artificial intelligence (AI) in areas critical to the military, such as situational awareness, decision making, and operational planning improvement. 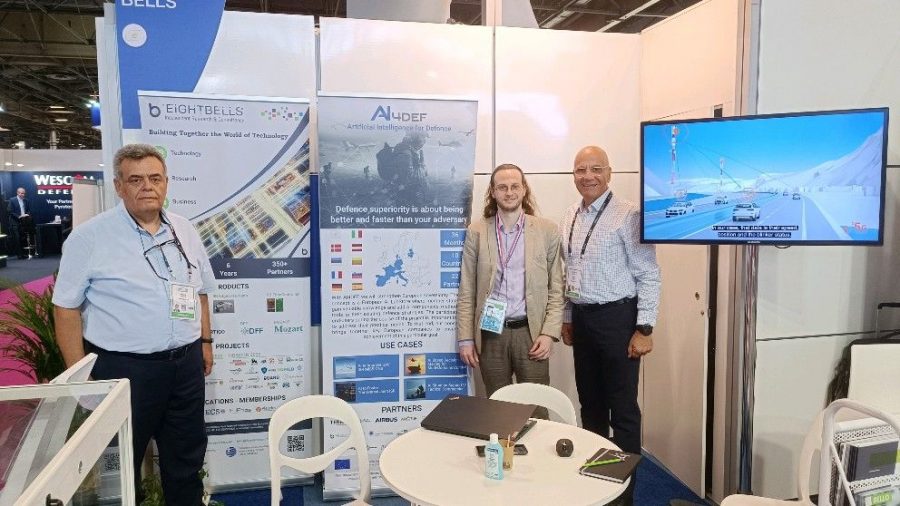 The RESPOND-A, in which Eight Bells participates together with companies and institutions from a total of 13 countries, operates within the framework of the European HORIZON 2020 Program. It aims to develop technologies based on 5G wireless communications, augmented and virtual reality or autonomous robots to optimize the work of first responders. 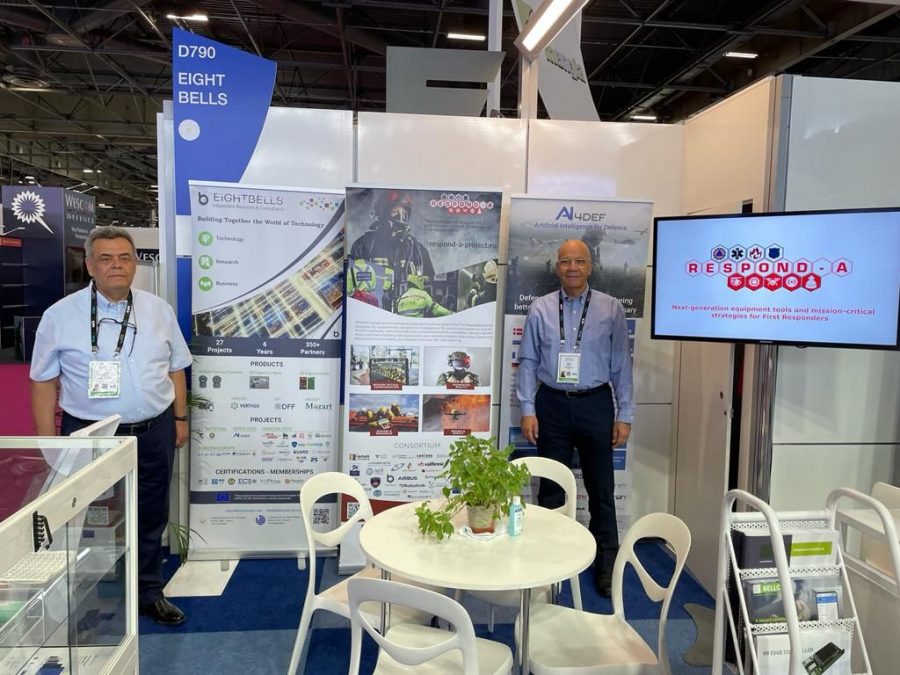 The EIGHT BELLS stand at EUROSATORY 2022

In addition, EIGHT BELLS also participates in the DRYADS. The project is based on the development of a new and innovative systemic and technological framework that will cover three areas: The DRYADS project will adopt a holistic fire management and an adaptive, collaborative governance approach based on the deployment of a new systematic and technological framework covering all three interconnected fire management stages:

As already mentioned, EIGHT BELLS, participates-together with other major European companies- in a project under the European Defence Fund (EDF) program. The project called COMMANDS, aims to develop a Through Life Capabilities (TLC) approach to intelligent manned and unmanned vehicles. In this way it will be possible to upgrade existing vehicles on the one hand and also to integrate it into future vehicles currently under development. It is related to the Integrated Unmanned Ground System (UGS) PESCO project. 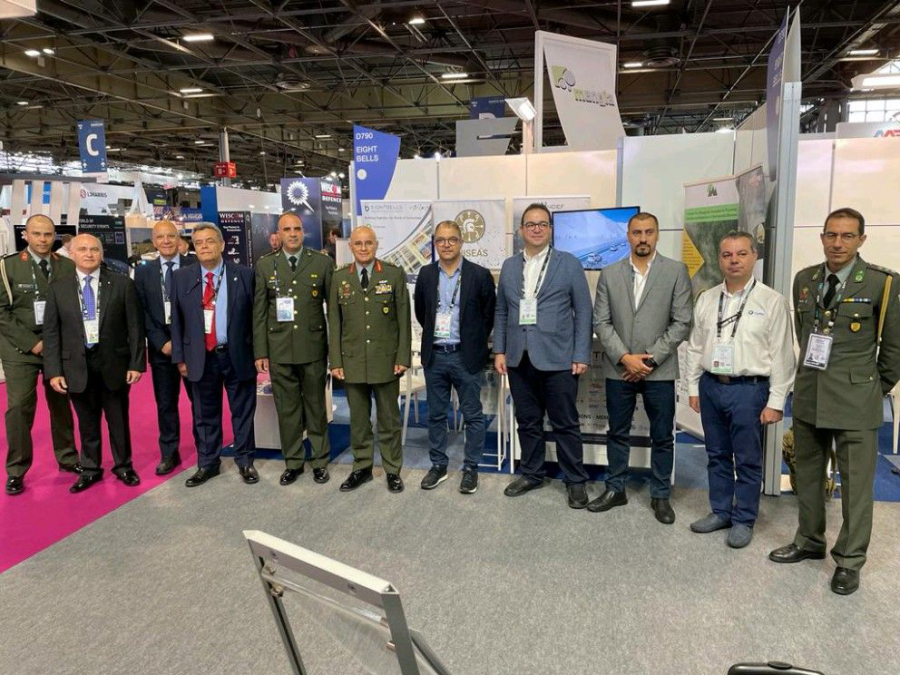 Apart from the above, EIGHT BELLS participates in the AInception project. The project ”AI Framework for Improving Cyber Defence Operations” (AInception) aims at developing Artificial Intelligence-based intrusion detection tools and techniques that outperform current military systems for selected scenarios and techniques that can abstract, aggregate, enrich and contextualise alerts into a more manageable set of abstracted meta-alerts. Among others, the General Staff of the National Defence of Greece participates in the project.

Another program in which EIGHT BELLS participates is ACTING (Advanced European platform and network of Cybersecurity training and exercises centers), which aims to develop a network of advanced interconnected centers for Cyber ​​Defence training and exercises. It aims to incorporate sophisticated methods and techniques for simulation, analysis of operator performance in cyberspace, as well as assessment of the cybersecurity situational awareness. It is related to the project of PESCO, EU Cyber ​​​​Academia and Innovation Hub (EU CAIH).

Finally, EIGHT BELLS HELLAS participates in the 5G COMPAD (5G Communications for Peacekeeping And Defence) program, with the aim of designing a prototype architecture for a powerful communications system based on 5G technology. This will have an application to selected platforms and defence systems.

EIGHT BELLS will participate in the forthcoming International Naval Defence & Maritime Exhibition & Conference EURONAVAL 2022, which will be held between October 18-21, 2022 in Paris.