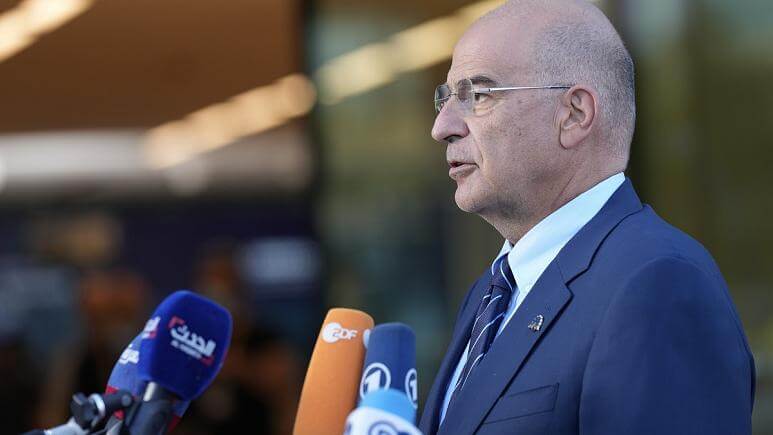 Foreign Minister Nikos Dendias briefed the Foreign Ministers of the European Union on the latest incidents of Turkish provocative behaviour during a discussion held in New York on the sidelines of the 76th UN General Assembly.

According to diplomatic sources, Mr. Dendias focused on the unacceptable action of a Turkish warship which interrupted the course of a vessel conducting research surveys within the delimited Greek continental shelf. He stressed that the Malta-flagged research vessel was located just 10 nautical miles east of Crete in a sea area bordered by the Greek-Egyptian agreement of August 6, 2020.

Mr. Dendias pointed out that Turkish behaviour has now gone beyond any framework. It is not in line with the image of “normality” that Turkey wants to project. As he commented, this is an image that unfortunately has nothing to do with reality.

The Minister’s schedule in New York

At the same time, Mr. Dendias continues his expanded diplomatic contacts, and today, among other things, he will meet with the Foreign Ministers of Saudi Arabia and Algeria.

The meetings of the Greek Foreign Minister are not limited to the network of countries with which Greece has developed close diplomatic relations. On the contrary, they move in a broader context, with the aim of cultivating relations with states with which Greece has a common understanding of key issues of International Law or a common interest in addressing international challenges.

In this light of these, Mr. Dendias met with the Minister of Foreign Affairs of Costa Rica, as it is a country with which Greece has a common understanding of the Law of the Sea. The second part of the Minister’s contacts focused on African countries, which play a central role in security and immigration management. Sub-Saharan and Central Africa countries are countries close to the Sahel, a region where security threats are growing and immigrants are crossing.

The rest of the Minister’s schedule included meetings with the Cypriot Foreign Minister, Nikos Christodoulidis, the president of the UN Secretary-General as well as the Maldives Foreign Minister. In addition, Mr. Dendias will participate in the meeting of the Foreign Ministers of the European Union, which focuses on Afghanistan and the new conditions being formed following the trilateral US-British-Australian defence alliance.

Today, the Foreign Minister will participate in the opening of the UN General Assembly, while he will also participate in a high-level event for the protection of women and girls in Afghanistan.