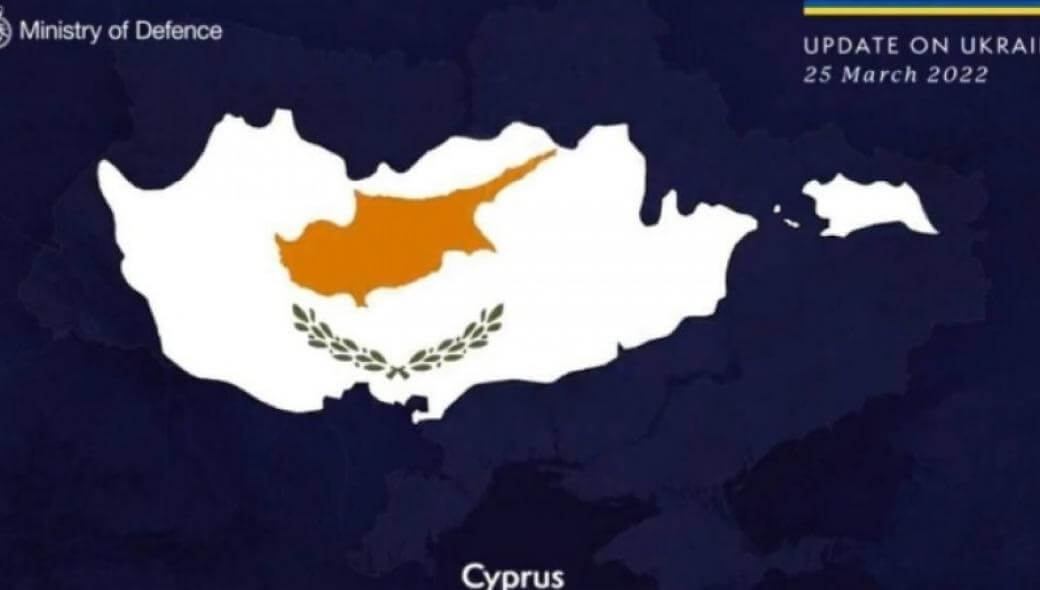 Reactions were provoked by the video presented by the British Ministry of Defence to condemn Russia’s intervention in Ukraine, as it depicts half of Cyprus, without the occupied territories.

The issue did not go unnoticed by the Turkish media, which rushed to interpret the video as “the first time an official body of the United Kingdom portrayed Cyprus as divided and accepted this reality”.

The video, which was posted on the UK Defence Ministry’s social media accounts, depicts the flags of countries condemning the invasion. However, the video does not include either the Occupied Territories or the British Bases.

It is worth noting that then, after the outcry, the video was removed from the said social media accounts.

This is the second time that the Republic of Cyprus is depicted as divided, as Moscow circulates a map with its 48 “hostile” countries, wherein Cyprus there seems to be two states, the Greek “hostile” one and the “neutral” one of the Occupied Territories. This is a “black list” of countries that have taken unfriendly actions towards Russia, which has been approved by the Russian government with the relevant decree already signed.

In particular, the government of the Russian Federation has approved a list of foreign states and territories that commit unfriendly acts against Russia, its companies, and citizens, and on this basis will proceed with sanctions such as restricting the issuance of visas.

It should be noted that Russian Foreign Minister Sergei Lavrov has referred to the so-called “Turkish Republic of Northern Cyprus” in his statements twice before the Russian invasion of Ukraine.