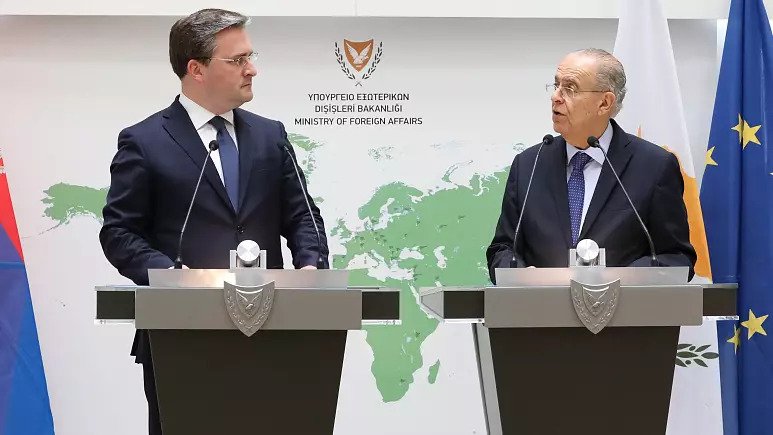 The Ministers of Foreign Affairs of Cyprus and Serbia, Ioannis Kasoulidis and Nikola Selaković, condemned the unilateral actions of Turkey and Kosovo, confirming at the same time the excellent relations between Nicosia and Belgrade.

The two Ministers had a meeting in Nicosia on Monday and in their statements Mr. Kasoulidis spoke of the excellent level of dialogue, the mutual commitment to further consolidate bilateral relations, and the high level of trust between the two Ministries.

He also expressed his gratitude for Serbia’s principled positions on the Cyprus issue and continuous support for a process that will lead to a peaceful solution, based on the relevant Security Council resolutions. Mr. Kasoulides also reiterated the position of Cyprus on the non-recognition of Kosovo.

The Cypriot Foreign Minister said that he informed his counterpart about the latest developments in the peace process in Cyprus and in particular about all the Confidence Building Measures proposed by our side. He also referred in detail to the recent Turkish provocations in the enclosed city of Varosia and Turkey’s announcements about new exploratory drilling in the Exclusive Economic Zone of Cyprus.

With regard to the Russian invasion of Ukraine, Mr. Kasoulidis said that he had the opportunity to explain the position of Cyprus, based on our full adherence to the rules of international law and the need to respect the territorial integrity and sovereignty of all states.

Regarding the situation in the Balkans, Mr. Kasoulidis said that the political environment in the region has become very fragile in recent years and a spark – such as yesterday’s events in Mitrovica – is more than enough to set the region ‘on fire’.

“We sincerely hope that the crisis will be resolved through diplomatic means, ensuring the well-being of all residents of the city. This confirms, once again, that the only viable way to ensure long-term stability and prosperity in the region is European integration,” said the Foreign Minister.

He also mentioned that the recent EU decision to start accession negotiations with North Macedonia and Albania is a positive step in the right direction.

The Minister of Foreign Affairs of Serbia, Nikola Selaković, confirmed the traditional friendship and solidarity between the two peoples and sent a message that the two countries are committed to deepening cooperation and expanding dialogue in all fields as well as that they are committed to a consistent principle of mutual support on key issues of state and national interest.

Mr. Selaković expressed his gratitude for Cyprus’ support for the territorial integrity and sovereignty of the Republic of Serbia, adding that in today’s talks “we also discussed the efforts made by Serbia in order to reach a compromise and therefore a viable, lasting solution to the issue of Kosovo. Any kind of unilateral approach is not acceptable, it is something that is completely contrary to reaching a compromise, or a sustainable and lasting solution,” he added.

He also stated that Serbia fully and unconditionally supports the efforts made by Cyprus to resolve its most important national issue, in order to preserve its territorial integrity and sovereignty.

He also reiterated Serbia’s position in relation to all the rights of the Republic of Cyprus under international law, the exploitation of its EEZ in the Eastern Mediterranean, and the return of Varosia to its rightful owners.

The Foreign Minister of Serbia expressed his gratitude to Cyprus for the consistent and continuous support to his country during its accession process. He said that Serbia is also interested in deepening economic cooperation with Cyprus and encouraged the business community to invest in Serbia which, he said, guarantees investment security for foreign investors.

Asked if the situation with Kosovo is better today, the Serbian Minister replied that it seems to be better, but the situation is still very fragile.