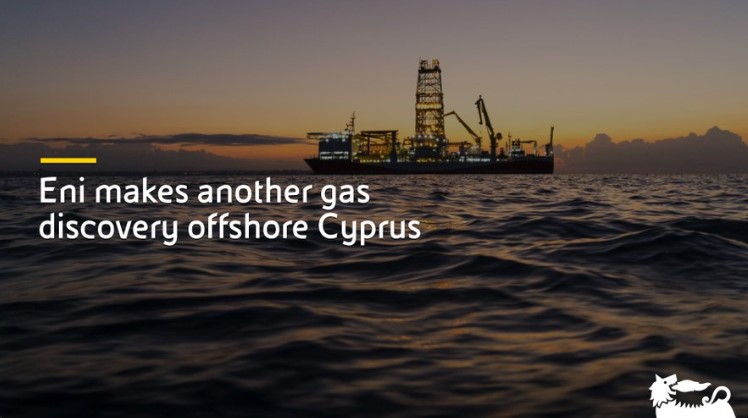 Another important discovery in block 6 of the Cyprus Exclusive Economic Zone (EEZ) has been announced by Nicosia.

According to an announcement by the Ministry of Energy, Trade, and Industry, during the works of the “Zeus-1” exploratory drilling by the consortium of Eni Cyprus Limited (Operator) and TotalEnergies EP Cyprus BV, 105 meters of pure natural gas were discovered within Block 6, with quantities equal to 2 to 3 trillion cubic feet (Tcf), according to preliminary estimates.

Eni announces a new gas discovery offshore Cyprus with the Zeus-1 well, the third consecutive discovery in Block 6 that confirms a promising outlook for the area and its development. https://t.co/0r00nGEwnB pic.twitter.com/xvberq0B2Z

The drilling was carried out by the drilling ship “Tungsten Explorer” at a distance of 162 kilometers off the coast of Cyprus, 5 kilometers west of the “Cronos-1” drilling in a water depth of 2,300 meters.

According to the same source, the discovery “Zeus-1”, the third consecutive one by the licensed consortium in Block 6, after “Calypso-1” and “Cronos-1”, has also been successfully tested in terms of its qualitatively technical characteristics and reaffirms the promising prospects of the area.

The Ministry of Energy and the consortium are considering ways to accelerate and make the most of the discoveries in Block 6 of the Cyprus EEZ, with the results of the new drilling being incorporated, by Eni and TotalEnergies, into the studies they are conducting in this regard.

Also read: H2Med | Construction program of “green” hydrogen pipeline to be completed by 2030