INTERNATIONAL RELATIONS
Cyprus | Anastasiadis and Tatar at a UNFICYP event
Defence Redefined
Published on 14/04/2022 at 09:00 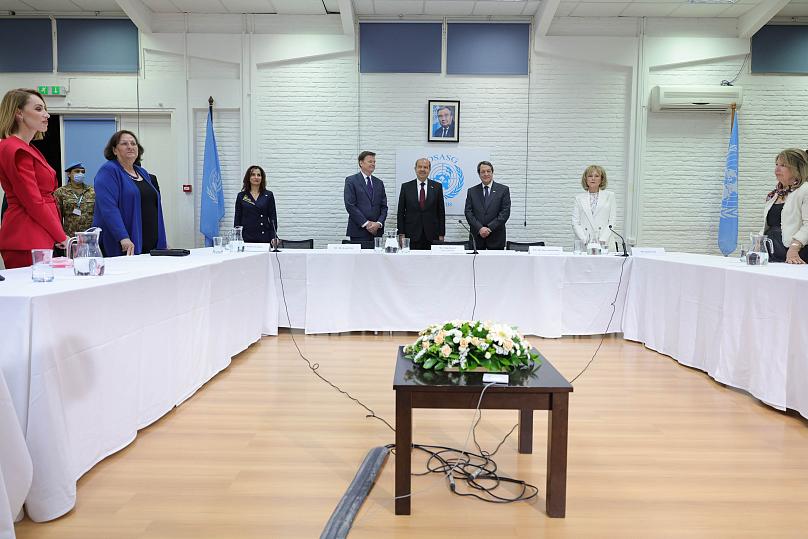 On Wednesday night, a UNFICYP event took place at the Old Nicosia Airport with the participation of the President of the Republic of Cyprus, Nikos Anastasiadis, the Turkish-Cypriot leader, Ersin Tatar, and the Special Representative of the UN Secretary-General for Cyprus, Colin Stewart.

According to Euronews, the event presented the Joint Gender Action Plan which aims at the full, equal, and effective participation of women in the settlement process of the Cyprus problem.

In statements on his arrival at the Presidential Palace from the old Nicosia airport, where he met with the UN Assistant Secretary-General, UNFICYP officials, and the Turkish-Cypriot leader, President Anastasiadis was asked if anything came to light following his meeting with Mr. Ersin Tatar after seven months, the President of the Republic said: “I wish it did, despite the fact that I suggested that it would be good to have a meeting since we are talking about the basis for a solution to the Cyprus problem, as has been agreed for decades, and to consider the concerns of each side to see how we can deal with them.

They seem to want and insist on the unacceptable position that sovereign equality should be recognized first and then we should try to see if there is ground for a solution. I suggested discussing the confidence-building measures that I have suggested. The statements of the Turkish-Cypriot interlocutor were sufficiently indicative of their intentions, i.e. a denial, to be brief.

I also stated that they should take measures so as to prevent the flows of refugees that we have been witnessing and that are – unfortunately – being instrumentalized. Furthermore, I told him that unfortunately they are being instrumentalized by Turkey for political purposes. He denied this and asked for a quick discussion with the experts. I told him that it is not a matter of experts, it is a matter of a policy of will to prevent all those thousands from arriving at the free zones every month. I am sincerely saddened because there is a constant intransigence on the part of the Turkish-Cypriots.”

Asked if there could be common ground at least on the appointment of a UN Secretary-General’s envoy, the President said, “how can there be common ground when the terms of reference that a Secretary-General’s envoy should have – and I do not care if it is special or personal, what matters is the terms of reference – are the taking of such measures of good neighborliness between two states, you realize that it is inconceivable to discuss something similar.

The meeting was attended by the co-chairs of the Technical Committee for Gender Equality. According to the action plan under discussion, the goal is to increase the participation rate of women in the talks to 30%. Speaking to reporters, Turkish-Cypriot leader, Ersin Tatar, said they had a good meeting and wished for progress on the Action Plan.

At the same time, he thanked the Special Representative of the UN Secretary-General for Cyprus, Colin Stewart, for his support.