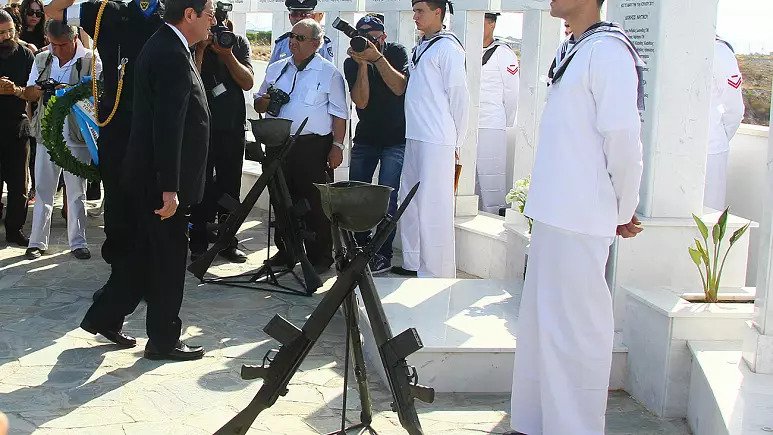 Today marks eleven years since the deadly explosion in Mari, which claimed the lives of 13 people. As in previous years, the Cypriot state also honors the memory of the victims of this ineffable tragedy this year.

Eleven years have passed since July 11, 2011, a day of mourning for the island that suffered the loss of 13 young men in peacetime. A deafening explosion shook the whole of Cyprus. The deadly explosion occurred at the “Evangelos Florakis” Naval Base in Mari.

The annual memorial service for the 13 fallen in Mari was held in the presence of the President of the Republic, Nikos Anastasiadis, and the Speaker of Parliament, Annita Dimitriou, at the Holy Church of the Cypriot New Martyrs, which was erected at the site of the explosion at the “Evangelos Florakis” Naval Base.

Also read: Tragedy in the National Guard | Female contracted soldier who was injured in an exercise dies

The statements of the Defence Minister

The sacrifice of the heroes of Mari is a symbol of self-awareness, but also of accountability for the future, and we, as a state, collectively and coordinately, must make those decisions that will not allow new tragedies to take place in the future, Defence Minister Charalambos Petridis said on Sunday, at the annual memorial service of Commodore Andreas Ioannidis, Warrant Officer Cleanthis Cleanthous and Petty Officer Antonis Charalambous.

Mr. Petridis said that the three boys and the other victims, through the ashes of the deadly explosion, became the reason to rekindle hope for a better tomorrow. The Minister also mentioned that the sacrifice of the 13 heroes of Mari is certainly the most tragic consequence of the explosion, stressing that the loss of human life is not comparable to any material or other damage.

“The unequal struggle they waged with the inferno of fire and the explosives in order to prevent further destruction amply proves that they were all distinguished by self-denial and self-sacrifice. With their death, they became part of the modern history of the heroes of our country,” said the Minister of Defence.

Mr. Petridis continued by saying that the tragic explosion of July 11, 2011, will haunt us forever as a nightmare of the mistakes, omissions, irresponsibility, and inadequacy of state mechanisms.

The victims’ memory is eternal.