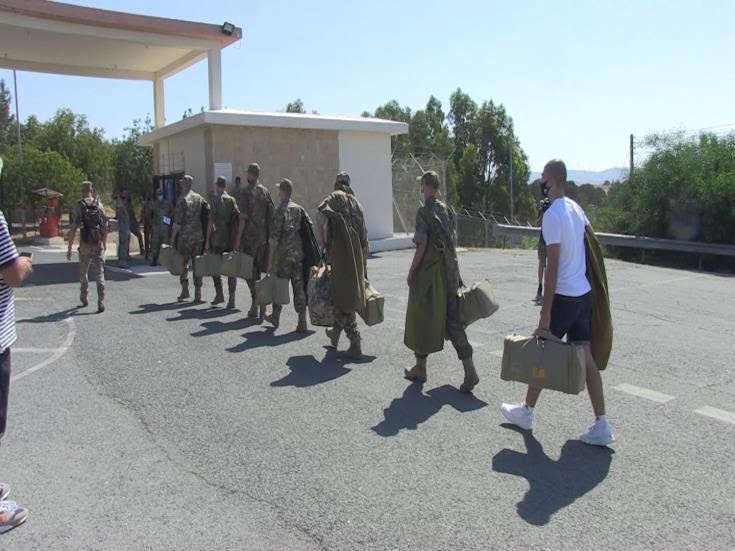 The classification of Class 2021 new recruits at the Anarita Training Center commenced today. Amid the pandemic and observing all security measures, the recruits – according to the announcement of the Ministry of Defence – arrived for their classification which commenced today July 19th and ends on July 26, 2021 at the Training Centers of Paphos, Larnaca, Limassol and at Camp “Ch. Samara” in Athalassa.

In Paphos the classification process commenced this morning and continues smoothly without any problems at the Anarita Training Center. New recruits have stated that it is their duty and responsibility to serve the homeland.

Newly-recruited Stefanos Kokkinos, 17, from Geroskipou, told reporters that he had come to serve his homeland, while 18-year-old Alexis Papavasilis said he was proud and responded to the call of his homeland immediately without a second thought.

Theodoros Karislidis also stated that he came to serve his homeland without a second thought, as everyone should do. Panagiotis Kyriakou, who lives in Timi, stressed that he feels joy and is deeply moved today, as he said, while the new recruit Nikolas Karatsilias, who arrived at the Anarita Training Center this morning, said that he will serve in the Special Forces since, as he explained, it is a tradition in his family.

Finally, Andreas Nikolaou said that he came to perform his duty towards the homeland with great responsibility and great emotion. The conscripts who were called to arrive for their classification at a specific time were presented in their military uniform they had received, all of them holding their safe pass, according to the current decrees of the Ministry of Health.

The Ministry of Defence also noted that, in order to avoid any inconvenience, the new recruits should not come by their own vehicles, since at the end of their classification, they will be transferred to their units by National Guard vehicles.

Also read: Information on the classification of new recruits of Class 2021