Iranian-backed Righteous Promise Brigades (RPB) terrorist group, which claimed responsibility for the recent attack in the capital of Saudi Arabia, issued a statement threatening a new attack in the United Arab Emirates.

On January 27, the mysterious armed group released a poster showing a drone attacking Burj Khalifa in the Emirate of Dubai. Rising at 829.8 meters, Burj Khalifa is the tallest building in the world. The attack depicted in the picture is strongly reminiscent of the attack on the World Trade Center that took place on September 11, 2001 in New York, USA. 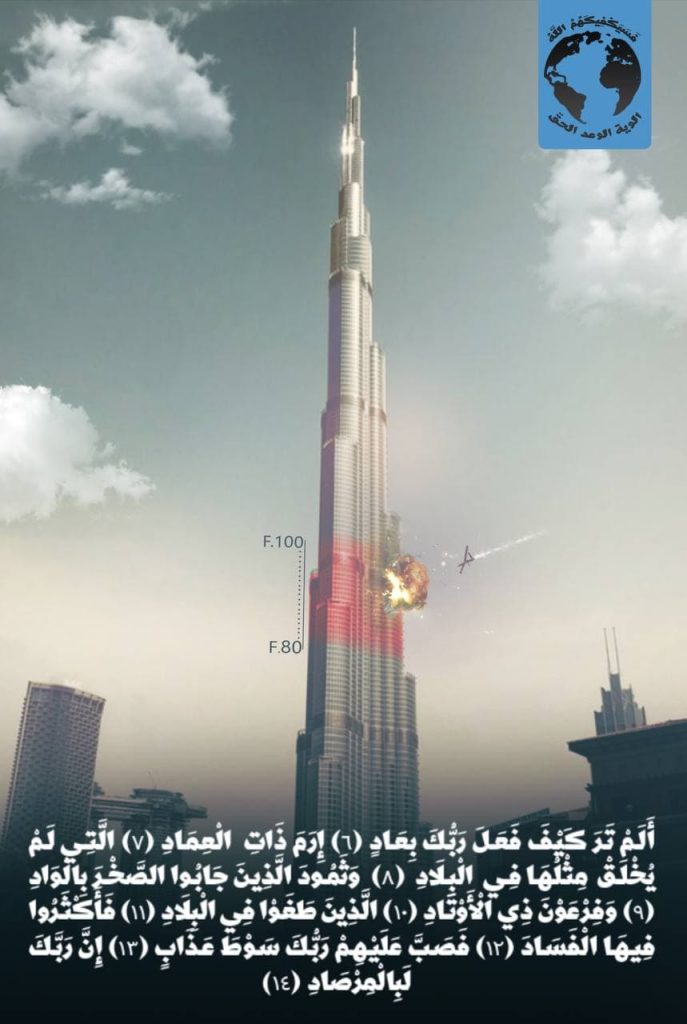 The RPB poster depicts an explosion between the 80th and 100th floors of Burj Khalifa, which also includes a verse from the Quran.

The RPB was behind the drone strike in the Saudi capital, Riyadh on January 23. According to the group’s claims, the attack targeted a number of positions in Riyadh, including Al Yamamah Palace, the official residence of the King of Saudi Arabia and the seat of the royal court.

In its first staτement, the RPB threatened to attack the UAE, and specifically Dubai. The new poster reinforces this threat.

“The second blow will be on the dens of evil in Dubai, with the help of the Almighty, if the crimes of Bin Salman (Saudi Crown Prince) and Bin Zayed (UAE Crown Prince) are repeated,” the statement said.

The RPB said its first attack was a response to the January 21 bombings in the Iraqi capital, Baghdad. ISIS claimed responsibility for the bombings. However, the RPB blamed Saudi Arabia and the UAE.