INTERNATIONAL RELATIONS
Bombings in Kiev, Odessa and Mykolaiv – Attacks in the Russian province of Kursk
Defence Redefined
Published on 29/04/2022 at 09:49 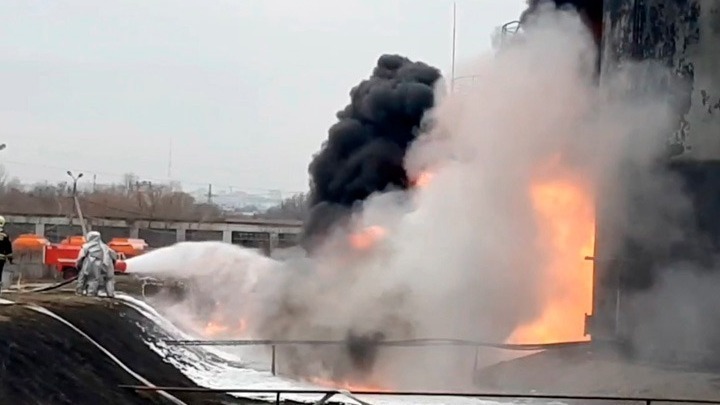 Kiev was the target of Russian bombings on Thursday, during the visit of UN Secretary General, Antonio Guterres, to the Ukrainian capital. At least ten people were injured in the attacks, according to the Ukrainian authorities.

The French News Agency (AFP) reported significant damage to a building that had been engulfed in flames, with rescue teams and police rushing to the scene.

At the same time, Odessa and Mykolaiv were bombed by Russian troops, Ukrainian local military authorities said yesterday, as Moscow appeared to be escalating its blows in southern Ukraine.

According to the command of the forces of southern Ukraine, Mykolaif was hit again by several Smerch rocket launchers, causing damage to houses, shops and cars. The command, which commented on the incident on Facebook, did not refer to casualties. Explosions were also reported in Odessa; however, Sergiy Bratsuk, the commander of Ukrainian forces in the region, assured that the air defence was in control of the situation, without reporting any casualties.

A village in Russia’s Kursk province which borders Ukraine was also attacked, the governor of the region said. He said mortars had been fired at a checkpoint in the village of Krupets. He noted that Russian border guards and the army responded to the fire and there were no casualties or damage.