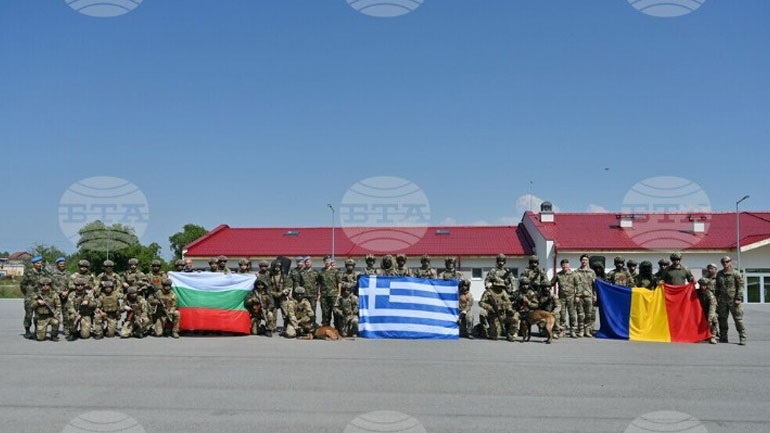 Members of the Bulgarian, Greek, and Romanian Special Forces demonstrated joint operational procedures at the Trantsa training center near Pazardzhik in south-central Bulgaria during the Balkan Spirit 2022 training, the conventional annual joint training of the three countries. This year, the said training is hosted in Bulgaria, the Bulgarian Ministry of Defence announced yesterday in a press release.

The said forces presented aspects of the main missions of Special Forces operations that are of the same type for all three countries, said Lt. Gen. Yavor Mateev, commander of the Joint Special Operations Command (JSOC).

The demonstration included parachute jumps from an L-410 aircraft, sniper fast-roping infiltration from a Mi-17 helicopter and target shooting, “mopping up” a building held by a terrorist with the help of a service dog, and small arms firing from various positions.

The JSOC commander commented that he is convinced that what they are doing is strengthening the defence capabilities of their countries, the Balkans, and NATO, adding that they can imagine how much these boys trust their comrades during live fire, protecting each other and hitting targets.

For General Mateev, Greece and Romania can serve as role models for what the Bulgarian Special Forces should aspire to. The Bulgarian commander commented that until two years ago they lagged two years behind their level and now the lag has increased because of the way they are treated and how much they are allowed to develop interoperability.

He further noted that the objective should be to achieve a level of interoperability with a ground, naval, and air special operations component, not just in terms of methods, tactics, and procedures, but also of organization, understanding, and interaction.

The Chief of the Defence General Staff, General Staiko Prokopiev, and the commanders of the Romanian and Greek Special Forces attended the demonstration in Tsranca.

Balkan Spirit 2022 is a conventional joint training that has been taking place on the territory of the three Balkan countries for the past years. This year the event is hosted in Bulgaria.