INTERNATIONAL RELATIONS
B. Nuland | Visit to Cyprus after meeting with N. Panagiotopoulos in Greece
Defence Redefined
Published on 06/04/2022 at 09:00 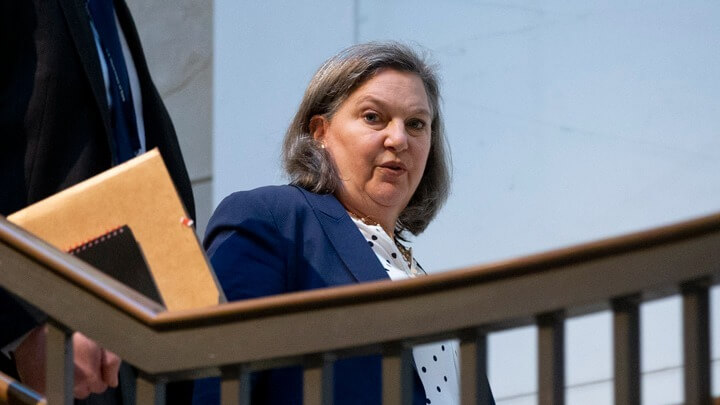 The Cyprus issue, Cyprus-US bilateral relations as well as energy and regional security issues are on the agenda of the contacts of the US Assistant Secretary of State for Political Affairs, Victoria Nuland, who arrives in Cyprus today.

According to APA MPA, during her visit, Mrs. Nuland is going to attend in the afternoon with the Minister of Foreign Affairs, Ioannis Kasoulidis, the inauguration of the “CyCLOPS” Cyprus Centre for Land, Open Seas and Port Security, established and operating in Larnaca. This will be preceded by a visit to the Larnaca Twinning Monument with the city of Odessa.

Tomorrow, Thursday, April 7, Mrs. Nuland will be received by the President of the Republic of Cyprus, Nikos Anastasiadis, at the Presidential Palace in Nicosia. The meeting takes place just a few days after the meeting of President Anastasiadis with US President Joe Biden in Brussels, on the sidelines of the European Council.

According to Andreas Iosif, the director of the President’s Press Office, in a relevant written statement, in the meeting with Mrs. Nuland, it is expected that the President will analyze his proposal for the Confidence Building Measures and will refer to the readiness of the Greek-Cypriot side for the recommencement of talks that will lead to a solution of the Cyprus problem.

The American interest in the Cyprus issue, but also in the developments in the wider region of the Eastern Mediterranean, is a given, Mr. Iosif characteristically notes.

During the meeting, it was stressed that the renewed, with the addition of new locations, Mutual Defence Cooperation Agreement (MDCA) between Greece and USA contributes to the expansion and deepening of the strategic defence partnership of the two countries.

The two countries’ broad cooperation in the field of armaments and the possibilities of further strengthening it with mutually beneficial armament programs were also underlined.

They also discussed developments in Ukraine, the importance of providing all possible support to the country and the protection of its territorial integrity, sovereignty and independence.

Regarding the security situation in the Eastern Mediterranean, the Minister of National Defence stated that Greece promotes, as a pillar of security and stability, bilateral and trilateral cooperation with countries in the wider region, condemns revisionism, violating and destabilizing attitudes and supports the need for full respect for international law and the principle of good neighbourliness.

Also read: War in Ukraine | Developments in the theater of operations – Greece’s willingness to take an active part in the reconstruction of Mariupol