ARMAMENTS
ARQUUS DEFENSE | Dynamic presentation at EUROSATORY with innovative combat vehicles, familiar to the National Guard of Cyprus – VIDEOS and Photos
Defence Redefined
Published on 31/08/2022 at 19:30 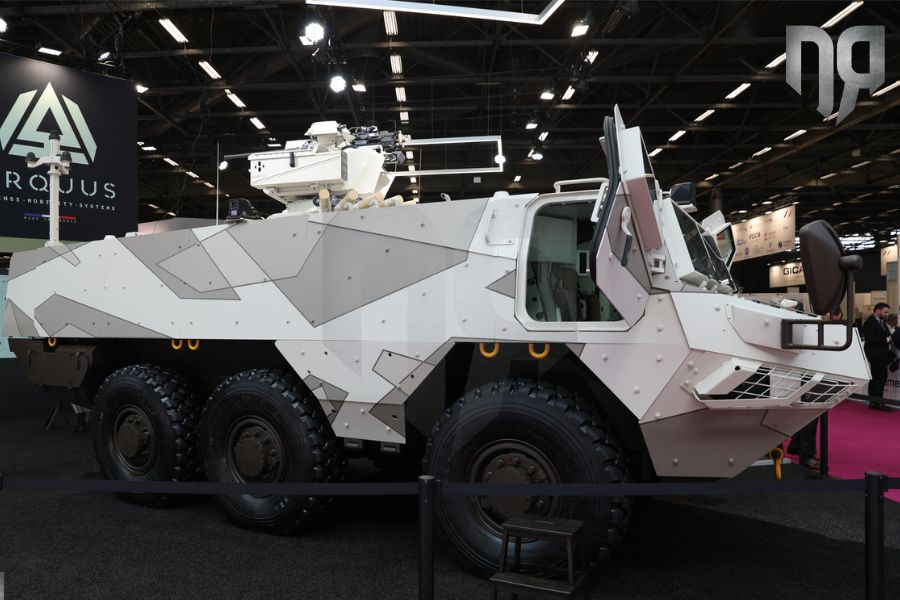 During the Eurosatory 2022 international Defence and Security exhibition in Paris, we visited the Arquus Defense booth, where we had the opportunity to be given an exclusive presentation of the vehicles by Mr. Marin Tollet, head of Press Relations of Arquus Defense.

Arquus Defense was established on May 24, 2018 from the merger between Renault Trucks Defense, Panhard and ACMAT. The company has a wide range of combat vehicles and other products such as the Hornet Family of Remote Controlled Weapon Stations (RCWS).  It is also worth noting that Arquus has more than 25,000 vehicles in the French Army, which represents 90% of all wheeled vehicles in service.

Together with Nexter and Thales, Arquus participates in the colossal Scorpion program of the French Army for a radical upgrade of the ground forces which include, among others, the supply of Griffon VBMR (1872 pieces) and Jaguar EBRC (300 pieces). Arquus is also responsible for the chassis of the new CAESAR MK2, Self-Propelled howitzer currently being developed by Nexter for the French Army and other clients.

Also read: EUROSATORY 2022 | The Jaguar 6X6 as a potential option to replace the “ageing” Cascavels of the National Guard

The company presented for the 1st time at the Eurosatory exhibition (after its launch as Arquus) the full range of its vehicles, some of which are familiar to the National Guard of Cyprus. A video presentation from the company’s Press Manager, Mr. Marin Tollet, can be found at the end of this article.

We will commence the presentation of the Arquus Defense products, with the legendary 6X6 VAB MK3 armoured vehicle, older versions of which have also been in service with the Cypriot National Guard since 1984. 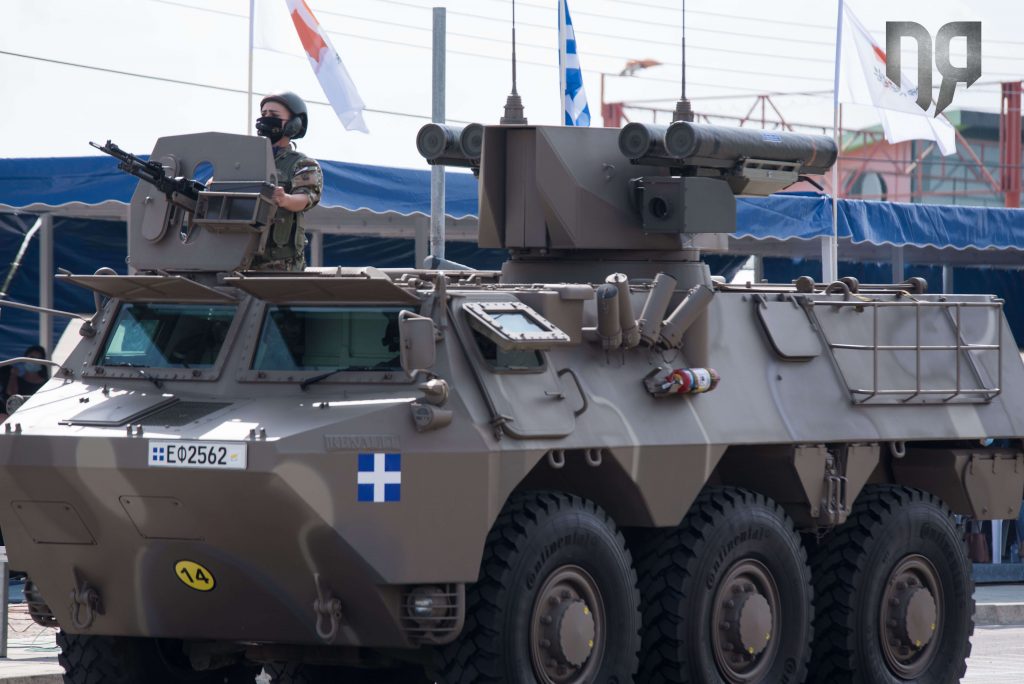 The battle-proven vehicle meets the NATO standards and can serve the needs of military units and security forces either as an Infantry Fighting Vehicle (IFV) or as an Armoured Personnel Carrier (APC) depending on the armament. 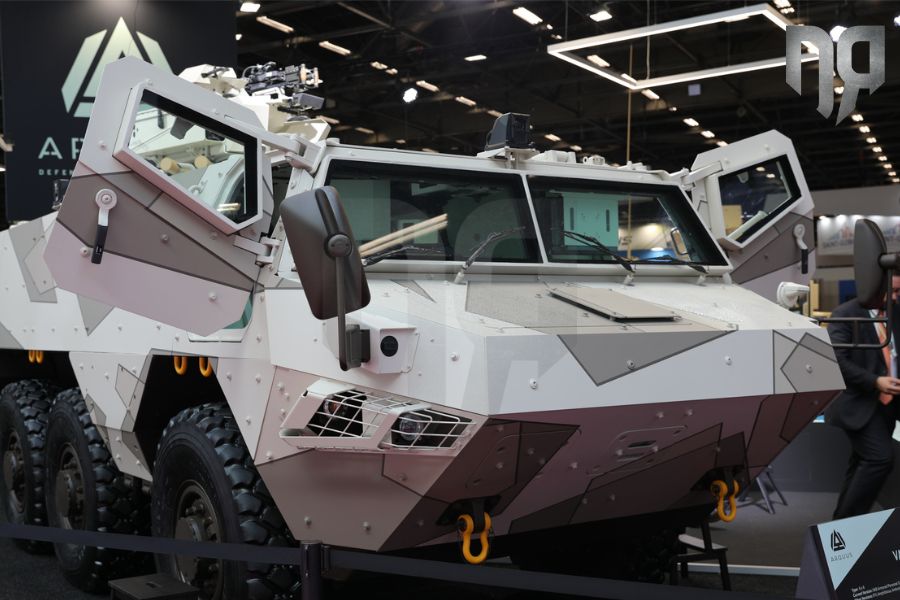 The VAB MK3 features ballistic protection and protection against Improvised Explosive Devices (IEDs), according to NATO standards (STANAG 4569), while it is connected to the network-centric Battlenet system of Arquus. The vehicle can be fitted with a Hornet family Remote-Controlled Weapon Station (RCWS) capable of mounting 7.62 and 12.7 mm machine guns or a protected ring mounted for 7.62 / 12.7 or even 14.5 mm machine guns. The vehicle is also equipped with smoke grenade launchers, RPG protection, RCIED jammer, NBC protection, day and night surveillance camera, intercom, wheel fire system, cab and engine as well as option for amphibious operation.

The VAB Mk3 can also be configured as a 120 mm mortar carrier along with 40 projectiles, as a Command Vehicle (CP) with a battalion-level information system and HF/VHF/UHF radio, as an ambulance and Law Enforcement vehicle. The vehicle showcased at Eurosatory featured the Hornet Stealth Protection system, which ensures the vehicle’s self-protection as well as collaborative protection for the whole task force. 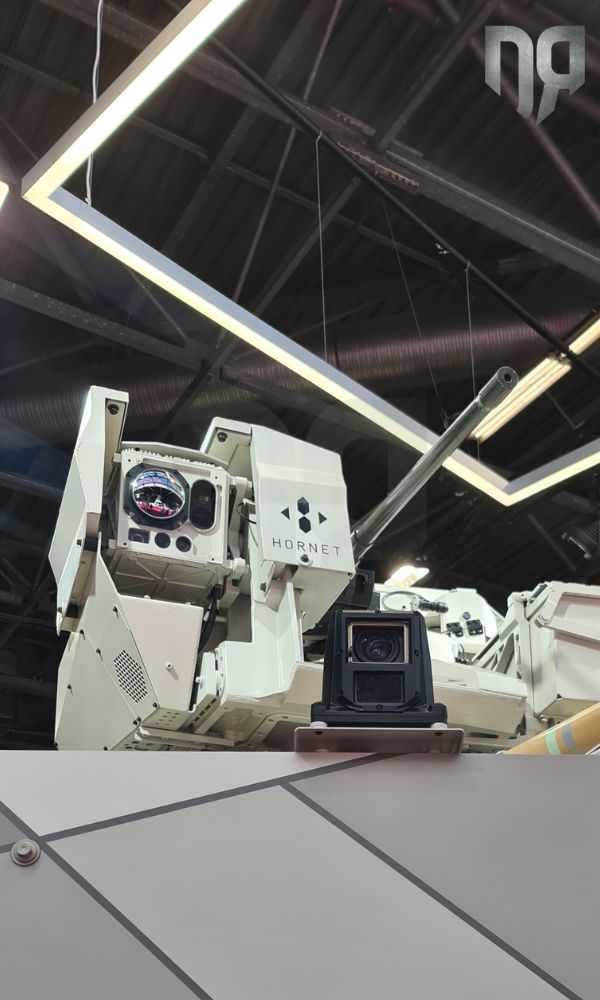 Upon detection of a threat, the Stealth Protection System warns the operator and automatically orients the GALIX smoke grenade launcher to face the threat as well as the Hornet RCWS, if the operator selects that option. The smoke grenade launch is then conducted manually or automatically, depending on the selected mode, effectively screening the vehicle from incoming targets.

In addition, the VAB MK3 at Eurosatory was fitted with a Pilar V acoustic gunshot detector by Metravib and the Battlenet vehicle and system sensors and effectors software management system, which links all sensors and equipment.

The VAB MK3 can also be equipped with 360-degree low-light and thermal imaging cameras by Bertin Technologies that provide the crew with a full 360-degree situational awareness and the vehicle with night driving capabilities. Furthermore, the integration of the Virtual Windows allows for more protection and facilitates the production, maintenance and repair of vehicles, alleviating the mental load for the operator, who can focus on his mission from inside the vehicle thanks to Battlenet. Another innovative solution presented for the first time at Eurosatory was the Arastelle micro-UAV, which is tethered to the vehicle and provides day and night surveillance capabilities from a height of 100 metres. That solution connects the drone to the VAB MK3’s energy network, thus ensuring a constant supply of power, which is a major advantage compared to the natural limits of drones, which currently solely rely on their own battery. The tethered solution also provides sufficient protection from electronic warfare or C-UAS systems. The drone in question can be deployed within 15 seconds with an automated take-off and landing process. 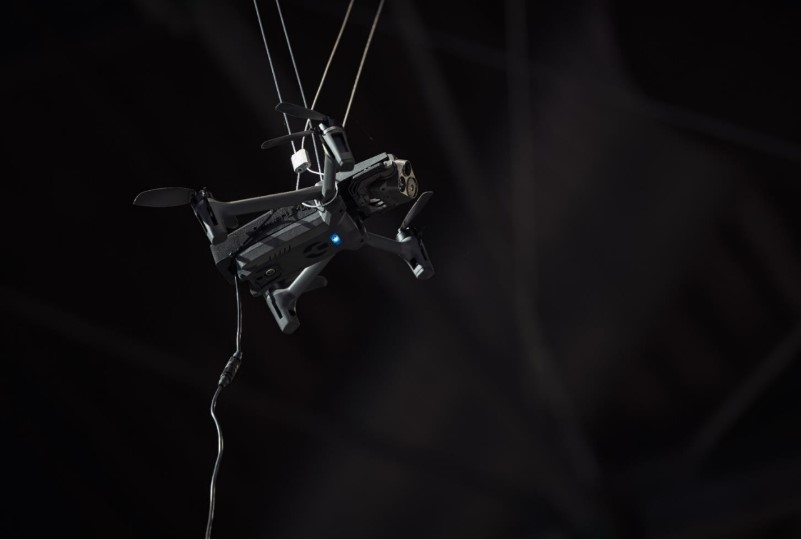 The Arastelle micro-UAV can be integrated into all types of new or retrofitted vehicles and is based on the US-made drone “ANAFI USA” of the French group Parrot. “ANAFI USA” is in service with, among others, the French Armed Forces and the Cyprus Police. This drone’s key features include a Dual 4K camera (wide, telephoto), a Boson FLIR 320 X 256 IR camera and X32 zoom.

We continue our Arquus products presentation with the Fortress MK2 Armoured Personnel Carrier. FortressMK2 is an evolution of the ACMAT Bastion Armoured Vehicle and is based on the VLRA chassis. It is noted that ACMAT’s VLRA truck – winner of the infamous PARIS-DAKAR rally in 1981 – has also been in service with the National Guard since 1990 as a 120mm (RT) mortar carrier. 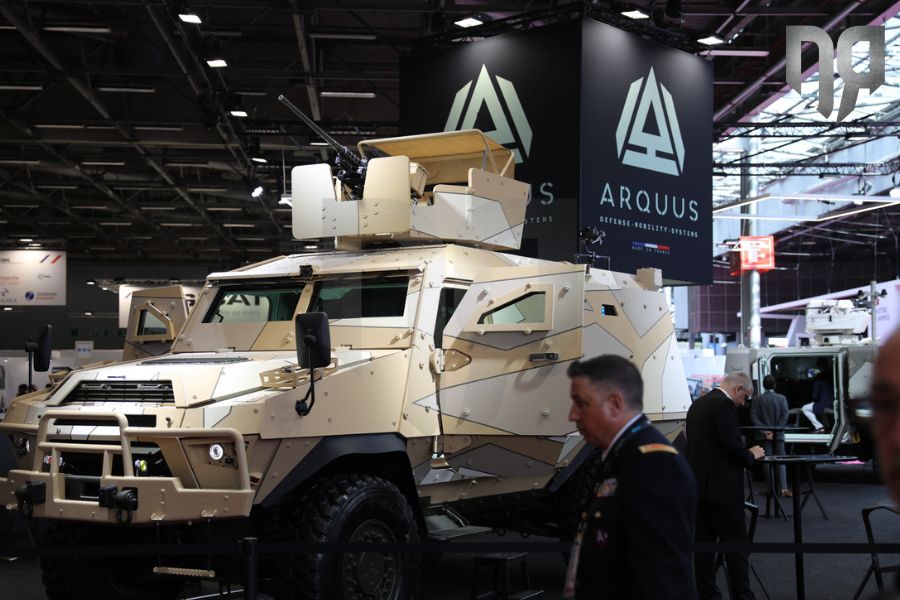 The Fortress MK2 at EUROSATORY 2022

Apart from the above, Arquus also presented the Sherpa Light family of light tactical 4×4 vehicles. Although smaller in size, Sherpa can be enhanced with the armour and weaponry of the previous two vehicles. The Sherpa family of vehicles include the Scout version, Station Wagon, Weapons System Carrier (e.g. 120 mm mortar) and the version for Security Forces. 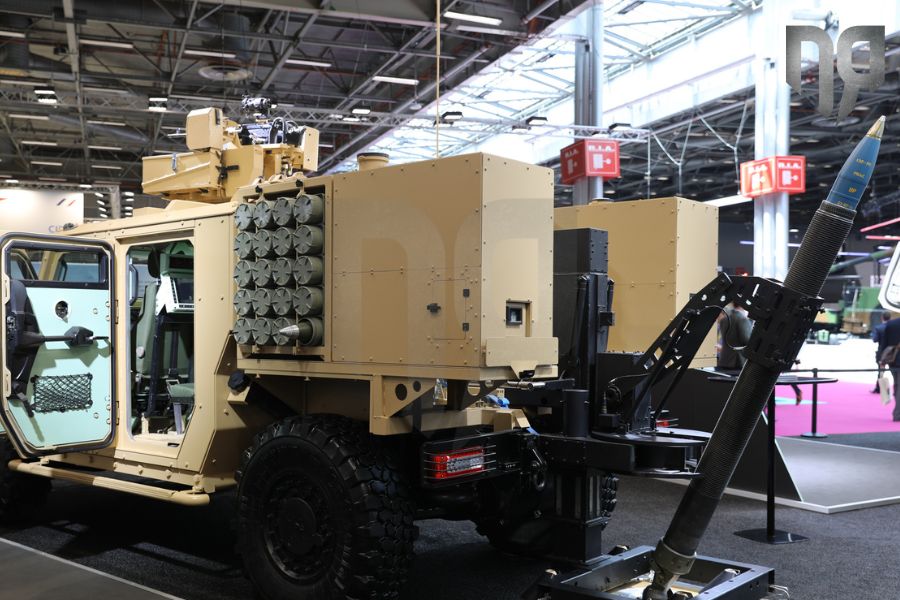 The Sherpa A2M (Advanced Mobile Mortar) vehicle presented at the exhibition was the carrier of the 120 mm rifled mortar system manufactured by Thales and NGTS (provider for the DMS-automatic loading system) carrying 40 rounds with a maximum range of 13 km. Regarding the level of equipment, the vehicle can be equipped like the Fortress MK2 with a remote-controlled weapon station and other electro-optical and electronic systems.

It is worth noting, that through the collaboration of Arquus with Saab, the Sherpa Light Scout in a CBRN configuration was also displayed at Eurosatory 2022 in addition to the Sherpa A2M (Advanced Mobile Mortar) vehicle. The Special Forces version of the Sherpa Light, the Sabre, was also exhibited on the MBDA booth with various systems including AKERON MP anti-tank missile launchers. 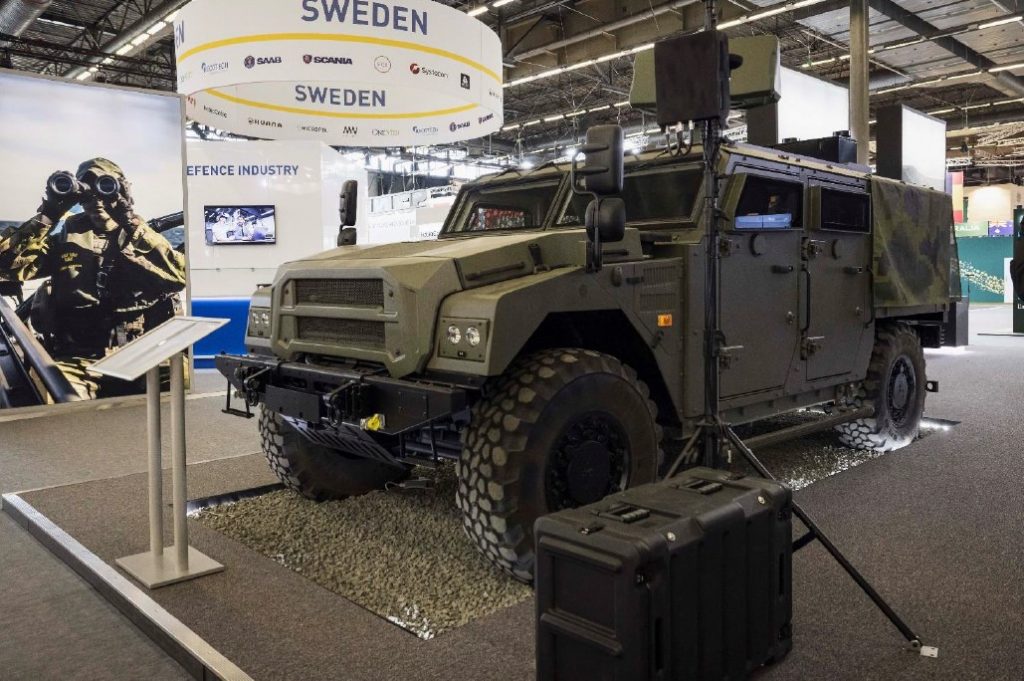 Next stop was Arquus’ latest product, the Scarabée futuristic vehicle, which attracted the visitors’ interest. Scarabée aspires to pave the way for the armed forces of the future with its hybrid-drive function. The Scarabée features a reduced environmental footprint as well as low thermal and noise signature, something particularly important from a tactical perspective. The Scarabée can also be equipped with the same level of armour as the other Arquus vehicles as well as with a 20 or 30mm automatic cannon. The vehicle at Eurosatory was fitted with an AKERON Hornet RCWS armed with a 0.50’’ Heavy Machine gun and an AKERON (former MMP) missile. The capacity to carry a total of 5 5th generation Anti-Tank missiles can transform the Scarabée into a stealthy tank-hunter. The Scarabée is also available in specially configured versions for reconnaisance, as a command post, heavily armed for special forces operations and security/counter-terrorism operations. 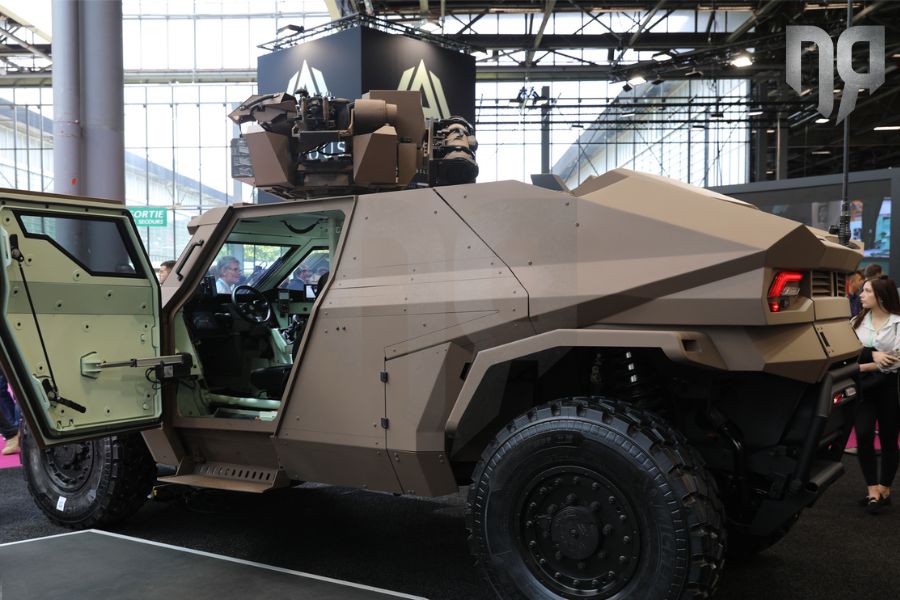 Arquus Defense also showcased the Armis family of trucks armed with a RCWS, but we will revert to that in another editorial. 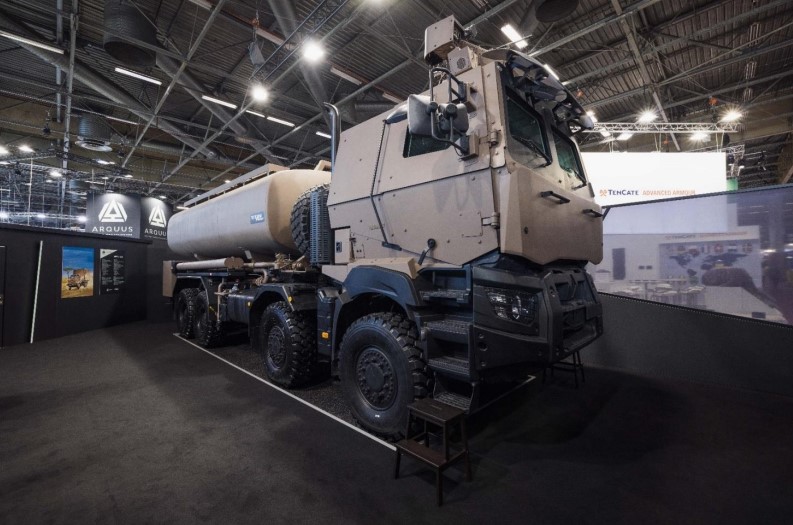